Some updates from the Texas Libertarian Party

Give us a few more years of The Fed printing money, undeclared wars, insane spending, a former pot-smoking black man locking tens of thousands of black men in cages for smoking a plant, crony capitalism, regulatory hell, and a goofy healthcare mandate, and we'll start electing some candidates.

Or will the voters start doing the right thing, and voting for liberty, without hitting rock bottom first?
Posted by The Whited Sepulchre at 2:06 PM 3 comments:

Here's an old poem about an entrepreneur and the government.  Classic stuff.  Can't believe I never posted any of it before.
It was written by an engineer named R.W. Grant in 1966.
I dare you to think of something besides the Hostess bankruptcy or the public abuse that the Papa John's Pizza founder is now taking....


This is a legend of success and plunder

And a man, Tom Smith,

Now Smith, an inventor, has specialized in toys.

So, people were surprised

When they found that he instead

Of making toys, was BAKING BREAD!

Cost less than people could believe.

And not just make it! This device

Could, in addition, wrap and slice!

The price per loaf, one loaf or many:

The miniscule sum of under a penny.

Can you image what this meant?

Can you comprehend the consequent?

The first time yet the world well fed!

And all because of Tom Smith's bread.

A citation from the President

This and other honors too

Were heaped upon his head.

But isn't it a wondrous thing

How quickly fame is flown?

Smith the hero of today -

Yes, the fickle years passed by:

Smith was a millionaire,

But Smith himself was now forgot -

Though bread was everywhere.

People, asked from where it came,

They would simply eat and ask,

"Was not it always so?

However, Smith cared not a bit,

For millions ate his bread,

And "Everything is find," thought he,

Everything was fine, he thought?

He reckoned not with fate.

Note the sequence of events

Starting on the date

On which the business tax went up.

Then, to a slight extent,

The price on every loaf rose too:

Up to one full cent!

"What's going on? the public cried,

He has no right to get so rich

On other people's hunger!"

With fat and drooping jowls

Indifferent to their howls!)

Well, since the Public does come first,

It could not be denied

That in matters such as this,

The Public must decide.

So, antitrust now took a hand.

Of course, it was appalled

At what it found was going on.

The "Bread trust," it was called.

Now this was getting serious,

So Smith felt that he must

Have a friendly interview

With the men in antitrust.

No rule of law had he defied.

But the their lawyer said:

"The rule of law, in complex times,

Has proved itself deficient.

We much prefer the rule of men!

The lawyer then went on,

You can rely upon"

You're gouging on your prices if

You charge more than the rest.

But it's unfair competition

If you think you can charge less.

"A second point that we would make

That would be collusion!

You must compete. But not too much

Then the market would be yours

Price too high? Or price too low?

Now, which charge did they make?

Well, they weren't loath to charging both

With Public Good at stake!

In fact, the went on better

Egad, they charged all three!

"Five years in jail," then the judge then said

"You're lucky it's not worse.

Robber Barons must be taught

Now, bread is baked by government.

Everything is well controlled:

True, loaves cost a dollar each.

But our leaders do their best.

The selling price is half a cent.

Can someone find Barack Obama's copy of this poem and shred it, and then explain to the dense s.o.b. that it's a Cautionary Tale and not an Instruction Manual for the economy?
Posted by The Whited Sepulchre at 8:37 AM 1 comment:

Email ThisBlogThis!Share to TwitterShare to FacebookShare to Pinterest
Labels: Atlas Shrugged, Government Must Intervene, parasites who think they're a host, poetry, The Government In A Cavalry Uniform, warnings

So many links...so little time.

Libertarian News.  Go here.  Bookmark it.
Posted by The Whited Sepulchre at 5:11 PM No comments:

Email ThisBlogThis!Share to TwitterShare to FacebookShare to Pinterest
Labels: anarcho-capitalists, good things, libertarianism, TIME JUST SLIPS AWAY WHEN YOU'RE SURFING, why I love the internet

There will be no spending cuts 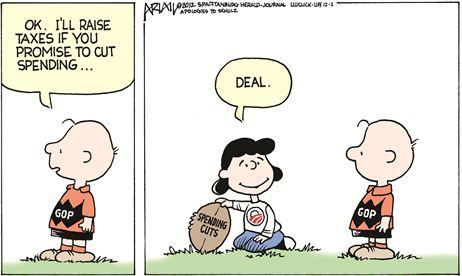 Posted by The Whited Sepulchre at 5:20 PM 4 comments:

This story is not true.

This story is not true.


outside rural Johnstown, Pennsylvania, after reports of three animal rights activists going missing after attempting to protest the wearing of leather at a large motorcycle gang rally this weekend. Two others, previously reported missing, were discovered by fast food workers “duct taped inside fast food restaurant dumpsters,” according to police officials.

“Something just went wrong,” said a still visibly shaken organizer of the protest. “Something just went horribly, horribly, wrong.”The organizer said a group of concerned animal rights activists, “growing tired of throwing fake blood and shouting profanities at older women wearing leather or fur coats,” decided to protest the annual motorcycle club event “in a hope to show them our outrage at their wanton use of leather in their clothing and motor bike seats.” “In fact,” said the organizer, “motorcycle gangs are one of the biggest abusers of wearing leather, and we decided it was high time that we let them know that we disagree with them using it, ergo, they should stop.”

According to witnesses, protesters arrived at the event in a vintage 1960′s era Volkswagen van and began to pelt the gang members with balloons filled with red colored water, simulating blood, and shouting “you’re murderers” to passersby. This, evidently, is when the brouhaha began.

“They peed on me!!!” charged one activist. “They grabbed me, said I looked like I was French, started calling me ‘La Trene’ and duct taped me to a tree so they could pee on me all day!”

Still others claimed they were forced to eat hamburgers and hot dogs under duress. Those who resisted were allegedly held down while several bikers “farted on their heads.”

Police officials declined comments on any leads or arrests due to the ongoing nature of the investigation; however, organizers for the motorcycle club rally expressed “surprise” at the allegations.

“That’s preposterous,”said one high-ranking member of the biker organizing committee. “We were having a party, and these people showed up and were very rude to us. They threw things at us, called us names, and tried to ruin the entire event. So, what did we do? We invited them to the party!

What could be more friendly than that? You know, just because we are all members of motorcycle clubs does not mean we do not care about inclusiveness. Personally, I think it shows a lack of character for them to be saying such nasty things about us after we bent over backwards to make them feel welcome.”

When confronted with the allegations of force-feeding the activist’s meat, using them as ad hoc latrines, leaving them incapacitated in fast food restaurant dumpsters, and ‘farting on their heads,’ the organizer declined to comment in detail. “That’s just our secret hand shake,” assured the organizer.
Posted by The Whited Sepulchre at 6:08 PM No comments: