From Samizdata, on the Occupy Wall Street movement: 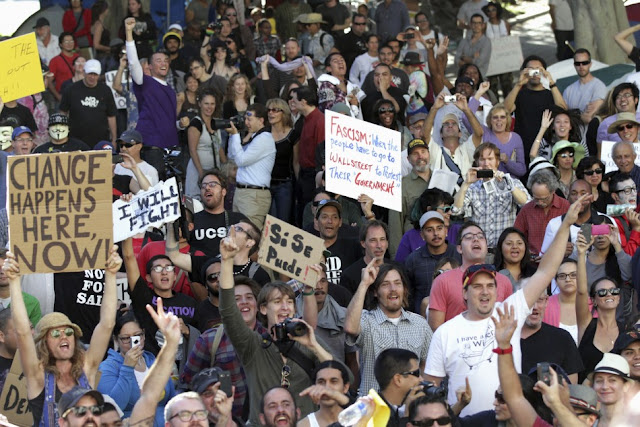 This isn't so much a political movement as a form of historical reenactment. That's why the OWS protesters are so vague about what they want - because what they want is to be camping out at a mass 1968-style protest. There's little difference between them and Civil War reenactors, except that the Civil War guys understand that it's not real and the outcome of their mock battles won't have any effect. The 1968 reenactors down on Wall Street have the quaint belief that what they're doing is real. 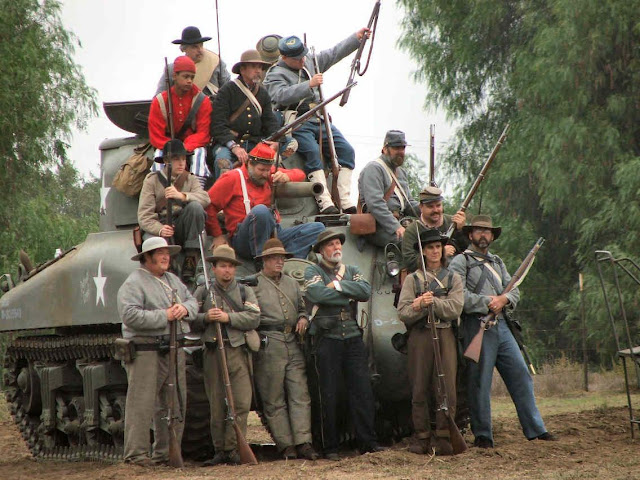 And from the comments:

They know so little (most of them) that they don't know the difference between reality and fiction. Which, by the way, is an indictment of our education system.

Moreover, they don't care about the difference.
I went to a university in California in the 1980s. We had the same phenomena then. People would protest for causes they knew nothing about. I'd talk to them and after establishing they knew nothing about apartheid in South Africa or whatever the cause du jour, they said that they were pursuing their business or law degrees so they could live the conspicuously consumptive young urban lifestyle; condo by the beach, a nice BMW convertible, etc.
They were protesting whatever, it didn't matter to them, so they could feel good about themselves. Sort of a variation of "I gave at the office." They gave to "the cause" while in college so they could be selfish the rest of their lives.
Of course, these people may be protesting the fact that they went deeply into debt making bad life decisions no one forced them to make, such as getting worthless degrees, expecting they'd just be handed a high-paying job requiring just as little effort as their lazy tenured professor asked of them, and now they're finding out they aren't going to live that easy, conspicuously consumptive lifestyle they imagined was theirs by right.

Now they're throwing a tantrum. But I see the selfishness part hasn't changed. They aren't protesting bailouts; they're demanding more for themselves. They want someone else to work to pay for their college loans, their credit card debt, the mortgages they want to get, ad infinitum.
In other words, they want to live like ante bellum plantation owners while someone else works to support them.

Hey, you people occupying Wall Street !! Look at this !! 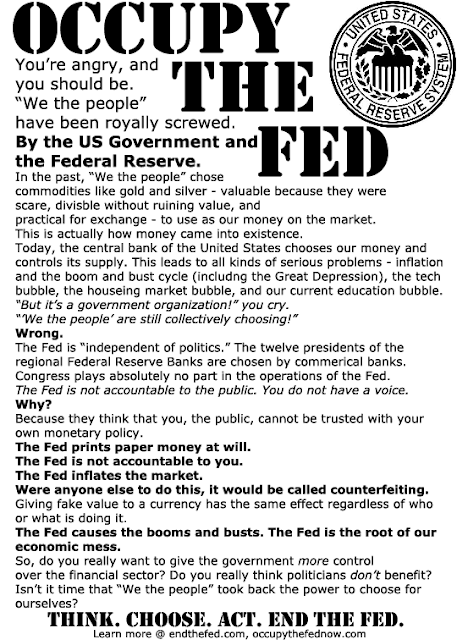 Posted by The Whited Sepulchre at 8:06 AM 2 comments:

If you don't hear much from our president for the next week, here is the reason why.

Doesn't the Secret Service know how important this is ???

Posted by The Whited Sepulchre at 7:57 AM 4 comments:

My Spamcatcher has a sense of humor

I got all the emails from the Republicrats and the Demoblicans during the last presidential election.  I like to keep informed.
My spamcatcher has a great sense of humor, and tried to give me a warning about Joe Biden.  Enjoy.

I need to ask you one last thing before tonight's midnight deadline:

If you know you're going to donate to this campaign eventually, what's stopping you from doing it right now?

If you're going to be a part of history in 2012, it's time to get off the sidelines.

So, before midnight, will you chip in what you can and say you're in?

This has never been about Barack and me.

We're just two guys. It's folks like you out there who will decide this election.

And what you're capable of is incredible -- if you decide to do it.

Joe
Posted by The Whited Sepulchre at 8:42 AM 1 comment:

There are moments that are so phenomenally delicious, so incredibly wonderful, so freakin' great, that I thank The Lord Zhool that I get to be alive for these moments.

One was the release of the ClimateGate emails that showed the impartial scientists plotting to keep skeptics out of peer-reviewed periodicals, hiding declines in warming, and the like.
Another was when John Kerry got busted for keeping his yacht out of state to avoid paying a ridiculous amount of taxes.
And how can we forget Warren Buffett's advocacy for higher taxes, while his own Berkshire Hathaway has been in a two-year lawsuit to avoid paying a billion dollars in higher taxes?

Yesterday I threw up a random video of an incoherent Occupy Wall Street protester.
It seems I wasn't alone in thinking the guy was hilarious.

It turns out, he's a Colombia Grad Student.  And what makes it better is that he has a freakin' trust fund set up by his grandfather.

Where are all the "Trust Fund Babies Against Capitalism" signs?
Never mind.  I found one on Michael Shanklin's Facebook page. 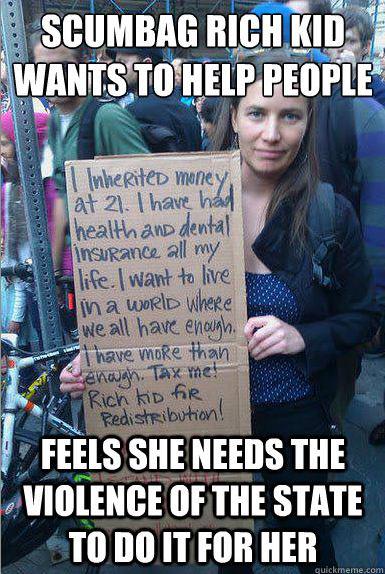 She needs guns pointed at her to share?!? Not sure why she can't just give her money away to those she feels needs it... it would be more efficient than any government monopoly. Sad, she can't even give charity on her own without government.... pathetic really. She is basically saying that she is too stupid to help people on her own,... and ironically enough, this stupidity extends into the belief that government is somehow efficient at it. What we are witnessing here is multiple stupidity syndrome.

That's the Trustafarian dilemma.  And they have absolutely no idea how the wealth on which they survive is created, and have no interest in learning about it or contributing to the process.

But they could end their guilt by writing one big-assed check to Uncle Sam.
Posted by The Whited Sepulchre at 11:53 AM 10 comments: