Gay Marriage, Start With Why, and The 100th Monkey

Something weird happened on Facebook three or four weeks ago.
It seemed like EVERYONE came out in favor of Gay Marriage Equality.
If you are a FB user, you probably saw icons like this one, with an "equals" sign symbolizing equality.  Apolitical, religious, non-confrontational friends (yes, I do have some) were all using it.

The Libertarians have been there for a long, long time.
Check this out, from the 1972 party platform: 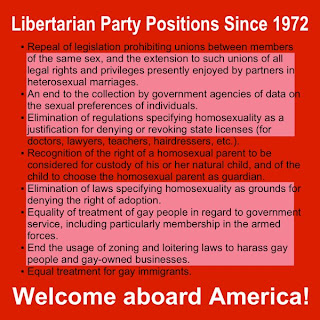 The Democrat party finally put something about Marriage Equality in their platform this year.  The Republicans are kinda dipping their toes into the water.
So what happend?

This is from the I-Change website.  I think I first heard it in a Jorene Taylor-Swift sermon several years ago.  It's called "The 100th Monkey".

The Japanese monkey, Macaca fuscata, had been observed in the wild for a period of over 30 years. In 1952, on the island of Koshima, scientists were providing monkeys with sweet potatoes dropped in the sand. The monkey liked the taste of the raw sweet potatoes, but they found the dirt unpleasant.


An 18-month-old female named Imo found she could solve the problem by washing the potatoes in a nearby stream. She taught this trick to her mother. Her playmates also learned this new way and they taught their mothers too.

This cultural innovation was gradually picked up by various monkeys before the eyes of the scientists. Between 1952 and 1958 all the young monkeys learned to wash the sandy sweet potatoes to make them more palatable. Only the adults who imitated their children learned this social improvement. Other adults kept eating the dirty sweet potatoes.

Then something startling took place. In the autumn of 1958, a certain number of Koshima monkeys were washing sweet potatoes -- the exact number is not known. Let us suppose that when the sun rose one morning there were 99 monkeys on Koshima Island who had learned to wash their sweet potatoes. Let's further suppose that later that morning, the hundredth monkey learned to wash potatoes.

THEN IT HAPPENED! By that evening almost everyone in the tribe was washing sweet potatoes before eating them. The added energy of this hundredth monkey somehow created an ideological breakthrough!

But notice: A most surprising thing observed by these scientists was that the habit of washing sweet potatoes then jumped over the sea...Colonies of monkeys on other islands and the mainland troop of monkeys at Takasakiyama began washing their sweet potatoes. Thus, when a certain critical number achieves an awareness, this new awareness may be communicated from mind to mind.

I don't know if I'd go that far with it, but it seemed like gay marriage equality, after spending about 40 years in the Libertarian Party Political Wilderness, was just suddenly there.

Here's something else that sorta ties in.  I've been reading "Start With Why", by Simon Sinek.  In addition to teaching about why leaders and businesses waste a lot of time and effort on the Who, What, Where and When (before getting to the all-important "Why"), Sinek has a great chapter on who is most likely to understand Why and change his behavior.
Who is most likely to sleep in front of a store to get an iPhone?
Who is going to purchase a new Bluetooth with only one new feature compared to his old one?
Who is going to fly Southwest Airlines at his own expense, when his employer is willing to pay 100% of the ticket on a rival airline?

This chart is called the Rogers Adoption/Innovation Curve.  Please note the divisions.
IMHO, the Libertarian Party was an innovator on the Gay Marriage Equality issue.  A lot of rank-and-file Democrats were Early Adopters.
Joe Biden and Barack Obama finally finished "evolving, and became part of the Early Majority about 20 minutes before the tipping point.
The Republican party will finish its hand-wringing and become part of the Late Majority sometime next year.  Hide and watch.
The Laggards will go to their graves opposing Gay Marriage Equality.

Here are some other issues where I believe the Libertarian Party will soon be joined by Early Adopters.

Think of all the reasons to stop waiting.
Come be with us.  It's fun to be first!!

Posted by The Whited Sepulchre at 11:35 AM 4 comments:

Did FDR end it? Or just extend it?

Here's UCLA economics professor Lee Ohanian on whether or not FDR's general goofiness eventually ended the Great Depression, or merely extended a recession into a full-blown disaster for the nation. It would be nice for the Teleprompter's Programmer to take note of this.
Posted by The Whited Sepulchre at 7:04 AM No comments:

I have struggled, and failed, for the last 5 years to express what Don Boudreaux says here in just three paragraphs.
Why in the hell would anyone opposed to The Religious Right or The Ultra-Secular Left want a larger, more intrusive government?

If you are a modern “Progressive” and cannot abide the notion of conservatives, Christian or otherwise, having a say in who you sleep with and who you may marry, when and why you may get an abortion, what sorts of scientific research and artistic projects should be funded, what school curricula should and shouldn’t include, or when and why Uncle Sam goes on world-policing ventures, then why do you wish to expand the scope of government authority? Doing so in a society with a wide franchise, such as the U.S., inevitably invites those rubes to intrude their antediluvian superstitions and dogmas onto you and onto all that you hold dear and sacred.


If you are a modern conservative, Christian or otherwise, and cannot abide the notion of “Progressives” having a say in how you school your children, what your tax rates are, what size Big Gulps you may buy, or whether or not you may fill in ditches and water puddles on your land, then why do you tolerate – indeed, frequently applaud – activities such as government’s ‘war on drugs,’ Uncle Sam’s interventionist foreign policies, strict immigration restrictions, and tariffs on imports? Doing so – by creating a large and discretionary state – only encourages those obnoxious know-it-alls to use government against you and against all that you hold dear and sacred.

Here’s why I ask the above questions: every time I’m in a supermarket check-out lane and catch the headlines of the reading materials on sale there – soap-opera digests, magazines featuring Oprah and other entertainment celebrities, and the like – I literally get a bit of a queazy feeling in the pit of my stomach. It somewhat sickens me that people care who Jennifer Anniston is dating, what Oprah is eating, or why male hunk du jour just ditched female sex-goddess du jour for some other equally vacuous if va-va-va-voom!-inducing babe. I don’t wish to prevent anyone from reading about or caring deeply about these matters about which I truly couldn’t care less. But it scares me that people who read that nonsense – because they care about that nonsense - have a say in how my life is conducted. I resent the fact that such people, if only through the ballot box, have influence how government orders me about.

The more expansive is the scope of government authority, the more my life is subject to commands issued in part under the influence of people who read Us magazine.

Not just scary.  Terrifying.  But people vote for more of it every 2 years.

Posted by The Whited Sepulchre at 9:26 AM 3 comments: