But political operatives are already producing attack videos cleverly designed to hurt the other side.

The actor in this video is a guy named Jason Tobias.  Nobody knows who really did the singing, but it wasn't Tobias.  I don't know who had the idea to produce this thing.  I don't know who gathered the background shots.  Whoever did it was a genius.

Republicans will be playing this thing at parties and rallies for decades.  Hell, I might start a Libertarian PAC to have it aired during the Super Bowl.

She Whose Name Is Not Spoken will never, ever recover from this.  This is the dirtiest trick I've ever seen.

Posted by The Whited Sepulchre at 11:31 AM No comments:

One of the things that I like about being a "small l" libertarian and a "large L" Libertarian is the consistency of the belief system.

It's almost like being Jewish.... an ethnicity and a religion, should one choose both.

You can be a libertarian without ever voting Libertarian.  It's all the same package.  Mindset and political party, should you choose both.

Our political platform changes very little, unlike those of the Rethuglicans or the Demoblicans.   Our message boils down to "Don't hit people and don't take their stuff".   Add a sprinkling of "Leave others alone just as you want to be left alone", and you've got it.

Therefore, it's fairly easy to come up with great lists of libertarian books.  (More on these later.)

Just for grins and giggles sometime, Google the terms "Liberal Books" or "Democrat Books".  You'll come generally come up with volumes of Hero Worship rather than ideology or philosophy.  Hit this for a typical example.  Lots of stuff about Kennedys who you would never leave your daughter alone with.

The Republican lists are a little better, but are generally laden with the bi-annual offerings of Fox News hosts, or they co-opt authors who could only be described as libertarian.

I'll post more on the book lists later, though.

The point of all this is movies.  If you go here, you can see the best Liberty movie list EVER.

And a special category of my own for:

And a few dozen others that reward repeat viewing.

Good stuff.  Here's the immortal "Chancellor's Speech" from "V For Vendetta", which I've probably posted a dozen times already.  Think of this every time you here a Political Beauty Contest Winner claim that we need a war, a stimulus, a healthcare plan, a retirement system, or increased regulations on something.

Brilliant.  Go here for the link to all the movies.
Go here to sign up for Netflix.  Start watching !!

Posted by The Whited Sepulchre at 6:25 PM 4 comments:

I hope all of you had a great Thanksgiving!
I know that I did....   6 parties/meals/events, and I gained about 5 pounds.

Now it's time for a rant.

My employer, Jukt Micronics, threw a Thanksgiving meal/party for the employees in each shop.  Several of the employees brought additional food from home. 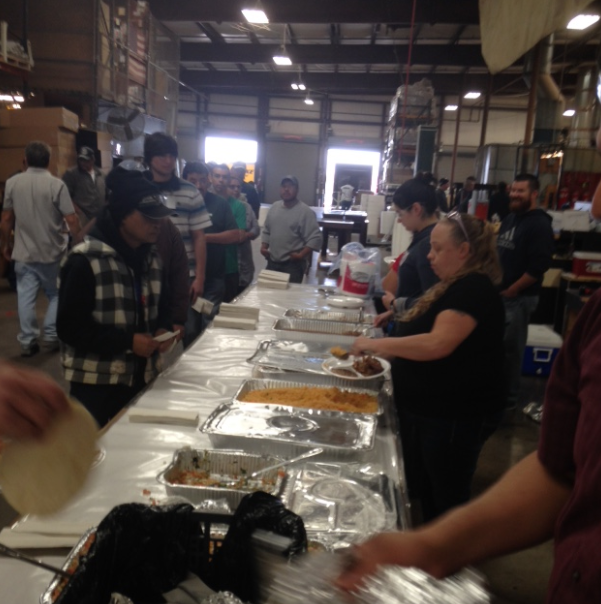 The main course was something called "Carnitas", which Bing defines as "a dish of Mexican cuisine. Carnitas are made by braising or simmering pork meat in oil or preferably lard until tender. The process takes three or four hours and the result is very tender and juicy pork meat, which is then typically served with chopped coriander leaves and diced onion, salsa, guacamole, tortillas, and refried beans."

Heck yes.  These were some authentic old-school Carnitas.  No one was injured. 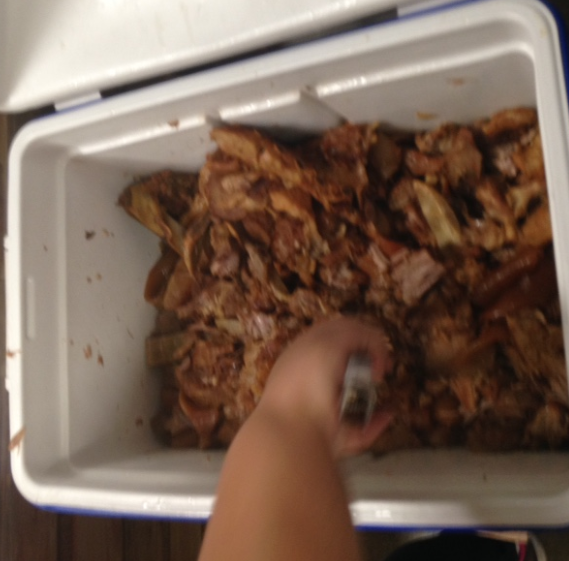 Later on in the week, we had a Supervisor's Lunch.  All food was brought from home by the Supervisors or their spouses.
Everyone who brought something brought enough to feed about 5 other people.
It was awesome.
No one was injured. 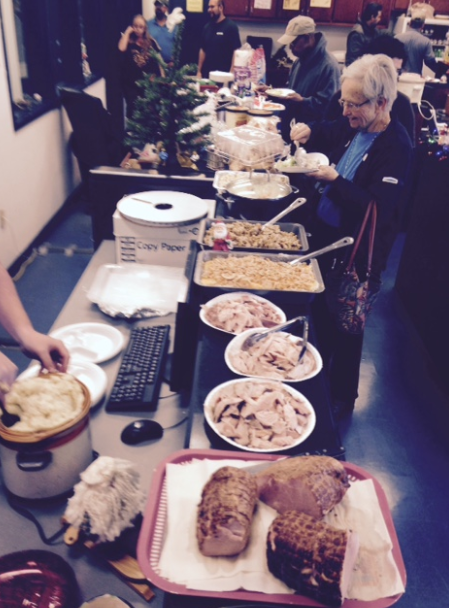 A few days later, I went to Gainesville TX, for the legit Thanksgiving meal with my youngest sister, her husband, and his extended family.
They cooked almost all of the food.  My mother (that's her with the whitish hair and blue sweater in the Supervisor Lunch picture) did the rest.  That's her again, in the next pic, on the far left at my sister's house.
She has taught me a deep and abiding love of food, groceries, meals, cooking, plants, animals, spices, and anything else that's edible.
Once again, no one was harmed.... 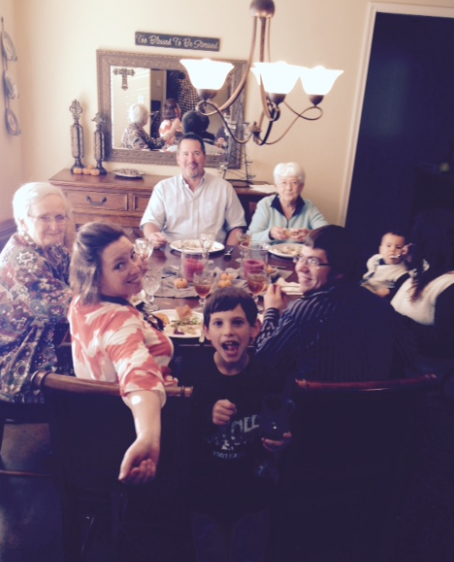 Thanksgiving night, some friends of mine from a local bar threw something that they call "Friendsgiving".
It was awesome.  100% of the food was prepared by my friends and their families.
No one was harmed, although I DID overindulge in bourbon, and have sworn off it for several weeks. 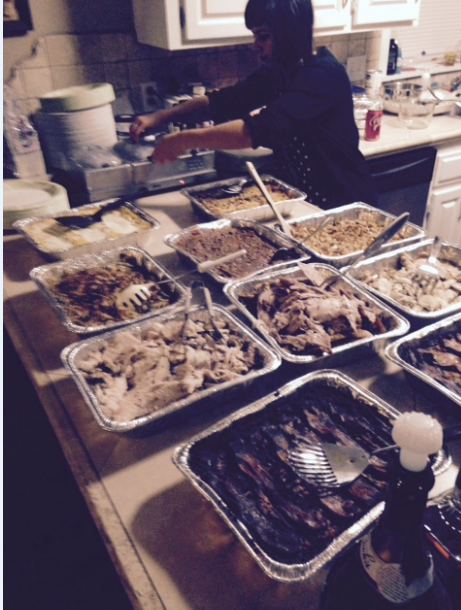 There was one other event centered around a west-side bar....,
And then another friend of mine threw another party Saturday night.
Both occasions featured plenty of food from homes.
No one had his stomach pumped.  (That's a total of 6 Thanksgiving parties, in case you're keeping score....)

So what's my point in all this?

Here's a letter that my shop received several months ago from the Consumer Health Division of the City of Fort Worth.  It's totally unrelated to Thanksgiving.  We got the letter back in April.
I've hung onto it for occasions when I'm in a bad mood and want to make it worse.

To: The Woodshop Manager

"Complaint Confirmed.  Warning issued to all 3 employees.  There was no sign of any PHF's onsite (Potentially Hazardous Foods - prepared from home)."

"One employee admitted they sell about 5 burritos a day."

"Explained to each employee that it was illegal of prepare foods @ home and sell them to the public.  If another complaint happens, a citation will be issued to the individuals selling prepared foods."

Let me rewrite that letter for you, ok?

To: The Woodshop Manager, who at this point is now my bitch,

It's painfully obvious to anyone who thinks about it for more than a few seconds that people are quite capable of making good choices about what to eat, what to buy, and whose cooking they trust.

However, my job gives me the right, and the responsibility, to hassle people about what foods they sell.

Tens of millions of people consume PHF's (Potentially Hazardous Foods) prepared from home without giving the City Of Fort Worth's Consumer Health Division a kickback money for a food-handler's permit or a license to sell burritos.

The quality and safety of the food doesn't improve at all as a result of my job, or the kickbacks licenses and permits.

But if you complain about this visit, my buddies in other City Hall departments will hassle you about your water runoff quality, your factory's air emissions, your habit of parking in the vacant lot next door that's not zoned for parking, or any of the thousands of other niggling little things we could use to make your life miserable.

So get out of the burrito and barbacoa business, or give me some money.

Signed - One Of Your Many Lords And Masters

I hope all of you had a great Thanksgiving!!
Posted by The Whited Sepulchre at 5:31 PM 3 comments: