The Power of The Market. Literally. 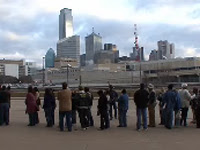 The line for yesterday's Barack Obama speech in Dallas stretched across the Reunion Arena lawn, into the parking garage, up several ramps to the top parking level, and then wound back and forth across the top level several times.

In my opinion, this was for the benefit of the TV crews in helicopters. (This picture is from WFAA.)

Once we finished our photo op (guaranteed to strike fear into the hearts of The Clintons and their demoralized supporters), the line moved at a speedwalker pace. Here's Jack Douglas of the Star-Telegram:

DALLAS -- Security details at Barack Obama's rally Wednesday stopped screening people for weapons at the front gates more than an hour before the Democratic presidential candidate took the stage at Reunion Arena.
The order to put down the metal detectors and stop checking purses and laptop bags came as a surprise to several Dallas police officers who said they believed it was a lapse in security.....

.... about 11 a.m., an order came down to allow the people in without being checked.
Several Dallas police officers said it worried them that the arena was packed with people who got in without even a cursory inspection.
They spoke on condition of anonymity because, they said, the order was made by federal officials who were in charge of security at the event.

"How can you not be concerned in this day and age," said one policeman.

Whether or not security at this event is modeled on the Democratic Party's immigration policy remains to be seen.

Posted by The Whited Sepulchre at 8:00 AM No comments: 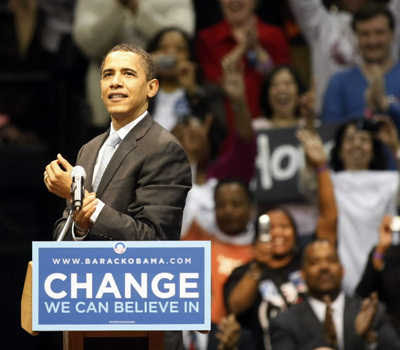 I think the last time I went to Reunion Arena was in the mid-1980's to hear Van Halen. It was a great show, and my ears were ringing for three days.
It will be longer than that before I can get Barack Obama's voice out of my head. I hope for change that the changed hope will change. We hope. Change. Hope. Changed Hope. Hoped for Change.
Because this morning, August 20th, 2008, I bravely descended into The Belly Of The Beast to hear Barack Obama at Reunion arena. (Photo from Fort Worth Star-Telegram)
Lord have mercy, that man can work a crowd. (Estimated between 15,000 and 18,500, and they were pumped.)
It was the standard Obama stump speech, most of which we've heard before. If you've ever seen Hal Holbrook do "Mark Twain Tonight", where Holbrook knows about 6 hours of Twain material, and can select the best lines based on his mood, the audience mood, the weather, or what's happening in the rest of the world, then you get the idea.
Obama is sharp enough to freely roam around the stage, work without a net, no teleprompter in sight, drifting back to the podium only to riff on his new lines that reference John McCain instead of The Clintons.
With the exception of a few high school classes who were there for extra credit, the crowd was eating out of his hand and asking for seconds. 18,000 people showed up at noon on a Wednesday ! ! ! To hear a man who was a mere Illinois state senator a few years ago ! ! ! How in the world can The Clintons - armed with nothing but plans, programs, presidential pardons and pantsuits - expect to compete with this guy?
You can argue that The Clintons have more experience. But Obama was the one experienced enough, and smart enough, TO HAVE A PLAN IN PLACE FOR ALL THE STATES VOTING AFTER SUPER TUESDAY fer heaven's sake.
Enough said.
Obama's acknowledgement that McCain is "an American hero" always gets applause from his crowds, and it got a polite ovation today. His dig at The Clintons for rummaging through his kindergarten ambitions got a laugh.
I'm sure that a complete text of the speech will show up online somewhere. There were several jarring moments in the speech, and I could probably argue them all night, point by point. I don't have the exact wording, so I'll borrow this one bullet point from his website. It's close enough to what was said today:
Trade that Works for Workers – Obama will end tax breaks for companies who ship jobs overseas and give breaks to companies who create good jobs with decent wages here in America.
First of all, most of us are workers. We make trade choices that work for us all day every day. Some of us trade with Neiman Marcus, some of us trade with Goodwill. If more and more people chose to trade with Goodwill, do we need to put barriers in place to protect Neiman Markups? Who will decide? The people who can't reliably deliver Sports Illustrated to East Fort Worth?
Let's look at "shipping jobs overseas"....The people who make the George Foreman Grill, to name just one....did they ship the job overseas, or was the job born there? If the first prototype George Foreman Grill was made in California, but mass manufactured components are made in The Phillipines to be assembled back in the U.S., does that qualify as shipping the job overseas? How many inspectors will we hire to learn the answer? How much will we overpay per job saved?
Let's take it further....the tax breaks promised above....will they go to everyone who pays a dime more than minimum wage? 2x minimum wage? The increasingly popular "living wage"? Will it apply to babysitters? Waiters working for tips? Will it be my definition of "decent" or someone else's?
But still, I know that I left Reunion resolving to live a better life. I have no freakin' idea why.
But I have Hope. And Change. And as David Brooks has pointed out, at some point the magic is going to fade. We're going to have to figure out how to compete in a shrinking world without selling protection to the highest bidder.
Vendors were selling Obama merchandise outside the arena. T-shirts, buttons, caps, baby bibs were all on the tables. Walking back to my truck, I couldn't help but take a look at the tag inside the T-shirts.
Yep. Made in Bangladesh.
Update from 2-23-08....See David's post at "Law, Legislation, and Lunacy" for more of the same on Obama's Free Trade contortions.
Posted by The Whited Sepulchre at 5:48 PM 4 comments: 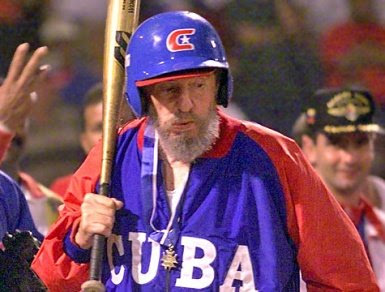 The good folks at The Line Is Here were the first to give me the news.

Fidel Castro, the wealthy plantation owner's kid who went on to own every plantation in Cuba, has stepped down as company president of Cuba Inc.
Castro gained control of Cuba Inc. through a series of Hostile Takeovers.
Forbes magazine estimated Castro's $900 million dollar fortune to be somewhere above that of Queen Elizabeth II, but less than that of Prince Albert II of Monaco.
In order to keep the family fortune intact, Castro will probably transfer power to his brother Raul. Little opposition is expected, since there are no other company shareholders outside of the Castro family.

Socialist ideology, like so many others, has two main dangers. One stems from confused and incomplete readings of foreign texts, and the other from the arrogance and hidden rage of those who, in order to climb up in the world, pretend to be frantic defenders of the helpless so as to have shoulders on which to stand.
-Jose Marti
Posted by The Whited Sepulchre at 7:02 AM 2 comments:

Carnival of The Libertarians #3

My friend Judy has posted Carnival of The Libertarians #3 at her site Consent of The Governed.
For more info on this and other Blog Carnivals, check out the sidebar to your right.
Posted by The Whited Sepulchre at 9:28 PM 1 comment:

Email ThisBlogThis!Share to TwitterShare to FacebookShare to Pinterest
Labels: Carnival of The Libertarians

My beloved Fort Worth Star-Telegram has endorsed Barack Obama and John McCain as the Democratic and Republican candidates for President.

It's going around.
Here are some more letters to the Star-Telegram on the topic about which I will not speak.....I met DeLores Jones a few days ago. Barrett worked for me a couple of decades ago, but has probably blocked out that part of her life.

They're also doing a 24-part series called "To Catch A Killer" that is so addictive it should be illegal. It's about the investigation of a 1997 murder. The newspaper version features graphics, photos, and plenty of sidebars. If you go online, they have videos, recordings, PDF files of old Star-Telegram coverage, and crime scene drawings. Altogether, they're slowly releasing a DVD ROM.

Perhaps projects like this one, which combine traditional and online content, might be the new direction for journalism. I already feel like I know these people. Sam Elliott, Robert Duvall, and Tommy Lee Jones could play "Rock, Paper, Scissors" to determine who gets the role of detective Curt Brannan in the movie. It takes the non-fiction/True Crime genre to a different place.

On a less grisly note, they've published an editorial by MY LITTLE SISTER Dr. Amy Cooper about a book called "The Geography of Bliss". Funny stuff.
The Star-Telegram has been on a roll lately. If Paul Harral played pro baseball, I'd think this was a contract year.
Posted by The Whited Sepulchre at 7:56 PM No comments: