How Not To Increase The Black Employment Rate

This morning on the way to work, I listened to NPR's Scott Simon interviewing Darrick Hamilton, an economist from "The New School".  (I often listen to NPR since I'm forced by the government's men with guns to help pay for it.)
The topic was the incredible disparity between black and white unemployment rates.  It's now a 2 to 1 ratio.

I interviewed black guys for about four hours yesterday, so I listened to the whole thing.  It took an ACT OF GOD to keep me from shoving my fist through the windshield.

Go here to listen to the whole thing.  If you're a regular reader of this blog, stay away from glass and sharp objects.

Perfesser Hamilton wants to have a Federal Job Guarantee.  Hit the link for the whole thing.


By creating a National Investment Employment Corps (NIEC), states and municipalities could develop inventories of needed jobs for all who are able to work, matching skilled and unskilled alike with full employment opportunities. Jobs would address physical and human infrastructure needs, including building, repair and maintenance of bridges, damns, roads, parks, museums, mass transit systems, school facilities, health clinics, child care centers, even restoration of our damaged postal system. Pay would range from a minimum of $20,000 to a maximum of $80,000, each job also providing benefits, opportunities for advancement, on-the-job training and professional development.

Christ Almighty in a sidecar.  Wealth is created by moving assets from lower valued uses to higher valued uses.  Nobody becomes better off in the long run by hiring more government munchkins to train more and more black unemployed drug war victims in the skills needed to build museums, or the "restoration of our damaged postal system" LOL.  But enough about Perfesser Hamilton's FDR-era fantasies....

I interviewed 5 black guys yesterday.  One of my supervisors (who happens to be black) sat in with me.  We heard 5 depressingly similar stories.

All 5 candidates had a criminal record related to the Nixon-Ford-Carter-Regan-Bush-Clinton/Rodham-Bush-Obama Drug War.
All 5 candidates would have cheerfully taken $5.00 an hour.  It would be illegal for them to work for that amount, BTW.  I could hire all 5 at $5.00 an hour.  Barack Obama, in his wisdom, will only let me hire 3 of them at $8.00 an hour and stay within my semi-budget.

A couple of these guys were really, really sharp.  They have absolutely no business coming to work for me, unloading shipping containers.  One of them was an honor student and captain of his high school basketball team, and had had a fairly good Air Force gig.

The disparity between black and white unemployment is a solved problem.  Eliminate the minimum wage.  End the idiotic drug war.  We could do this tomorrow.

But we're just too compassionate.
Posted by The Whited Sepulchre at 1:58 PM 2 comments:


This is the ultimate Libertarian sex fantasy, compliments of the great Daniel J. Mitchell of the International Liberty website:

On the way home (an extreme libertarian) stopped at the gas station where a drop-dead gorgeous blonde was filling up her car at the next pump.

She looked at the ammo in the back of his pickup truck and said in a very sexy voice, “I’m a big believer in barter. Would you be interested in trading sex for ammo?”

He thought a few seconds and asked, “What kinda ammo ya got?”


Posted by The Whited Sepulchre at 5:30 PM No comments:

Ron Paul on the response to the Boston bombings 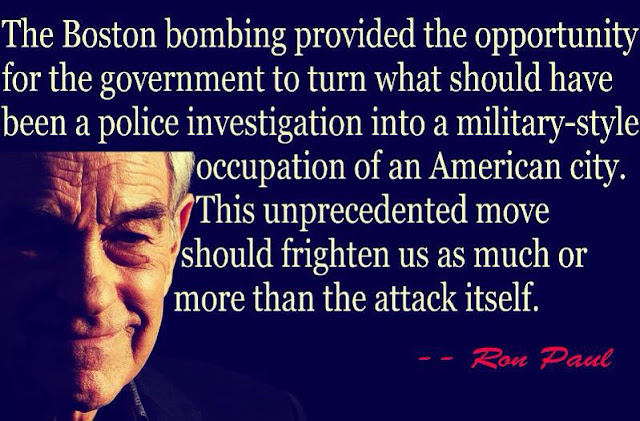 Someone named Tiffany who goes to a private academy in Dallas sent me some questions about the Libertarian Party Of Texas for a school project.
Since I'm feeling lazy this morning, I'm letting it double as today's blog post.  Thought it might shed a little light on how we work.  The rant at the end has almost been finessed into a liturgy.


I hope these answers are satisfactory. Let me know if you need any details.

-Does the Libertarian Party of Texas's platform differ from the national party’s platform?

The platforms occasionally differ in degree or in emphasis, but seldom in principle. There are two issues for which the core libertarian philosophy doesn’t provide easy answers. Abortion (two possibly conflicting sets of rights), and immigration in the context of a welfare state.

One of the best things about being a Libertarian is that our core platform really doesn’t change, whereas the Democrats and Republicans have swapped or otherwise changed their positions on several issues over the last 50 years.

-What do you do within the State branch?

In addition to acting as Tarrant County Chair, I serve on a committee called SLEC. This is the State Libertarian Executive Committee. Our core responsibilities are to ensure that we have ballot access, that the message of Liberty is spread throughout the state, and to oversee the state conventions every two years. There are several committees within that group, and I currently chair the Compliance committee. We ensure that all actions taken by the county groups and SLEC are done according to the by-laws, and can withstand any legal challenges.

-What is the Libertarian Party of Texas's main job/function?

The purpose of the Libertarian Party of Texas is to win elections.

We also elect and send delegates from Texas to the national conventions, where they select our presidential and veep candidates.

-Which candidates is the Libertarian Party of Texas currently supporting and which elections are you all currently preparing for?

All of the “off-year” elections are non-partisan. But because of his pro-liberty stance, we’re encouraging people to support Daniel Wood, who is running for Arlington City Council. Sybil Lane is running for the school board in Crowley and she seems to have some strong libertarian support. We’re also making phone calls for John Basham, Tim Nold, and Mary Kelleher, three of the candidates for Fort Worth Water Board. These local elections are extremely important to us, even though no one runs under a Libertarian Party banner. It’s a shame that so few people vote in them, because the local races are often more likely to have a direct impact on the citizens than the national contests do.

Fundraising is often a struggle for us. The Big Two fund their campaigns by blatantly selling exemptions to the tax, import, and tariff codes. It’s difficult to raise large amounts of money by promising to merely leave you (and your competitors) alone.

Fundraising for individual candidates has almost become a theological dispute for us, with some libertarians insisting that the national, state, and local parties not get into the business of “picking winners and losers”, and others wanting to put 100% of our limited resources into just a few competitive races in hopes of winning more elections.  At this point, the candidates are supported by their own fundraising events, with administrative and some logistical support from the county and state operations.

-On what does the Libertarian Party of Texas spend most of their money?

Publicity for the party, administration, educational events and conventions.

-What are two recent headlines/events with which the Libertarian Party of Texas associated?

The state party recently hosted an activists forum about dealing with the Texas Legislature. Speakers from NORML, the ACLU, a gun group, a transportation lobby and others all gave their take on how to lobby the legislature, where they’ve succeeded and where they’ve failed. Since this is an off-year for elections, the county organizations have been more active and visible than the state level operation.

-Does the Libertarian Party of Texas face any obstacles?

The biggest obstacle we face is something called the “wasted vote fallacy”. This is the belief that unless you vote for a Democrat or Republican, your vote is wasted.

Please remember that your share of the national debt is $50,000.00, and even more if you intend to grow up and be a net taxpayer to the federal government.

Your share of the government’s unfunded liabilities is more than $350,000.00

The Democrats and Republicans got you this far into debt by working together, as a team, in a bi-partisan manner.

They are borrowing billions of dollars from China, to protect the South Pacific from…..China.

We have enough people in our military (45% of the world’s military spending) to put a soldier along every 20 feet of the borders of the United States.

According to author Michelle Alexander, Barack Obama now has more black men confined in steel cages (mostly for owning or selling a weed) than The Confederate States Of America did prior to the start of the Civil War. One million government jobs could be eliminated if we were to end the Drug War (which is why so many government employees support the Drug War.)

The Federal Reserve printing press on Blue Mound Road in Fort Worth is pumping an additional 65 billion dollars a month into the nation. You’ll soon see prices rising because of this.

The only “wasted” vote is a vote to maintain this disaster.

Tarrant County Libertarian Party Chair
Posted by The Whited Sepulchre at 9:51 AM No comments: