Why I Am A Libertarian, Part 2

Because of reconnecting with old friends on Facebook, I'm doing a series of posts about what makes someone go from political near-apathy to rabid Libertarian.
If you hit the "why I'm a libertarian" tag at the bottom of this post, or read a random dozen of any others, you can tell that I've got some Father issues. Not in the godawful late 1980's men's movement sense, where grown men go into the woods and sit in a circle and hit drums and read the poetry of Robert Bly while crying that their fathers didn't love them.
My issues are more basic than that - my father left shoes that are too big for me to fill. I can honestly place my right hand on a copy of "The Revolution" by Ron Paul, and swear that my father was the best man I've ever known. A near saint.
Now that we have that background established.... sometime in the early 1960's, the government started giving a combination tax write-off/cash subsidy to farmers whose land was "terraced". Rachel Carson's book Silent Spring, the book credited with starting the environmental movement, had just been released and conservation was in the air. The idea was that terraces - created by flattening sections of hillsides - would prevent soil erosion.
This is what terraces look like in Chinese rice fields. Flattening large section of the hillside prevents cultivated land from washing away during rains: 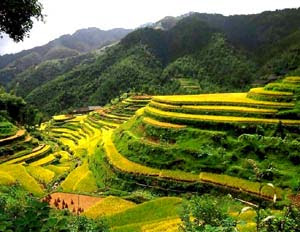 My father and uncle were among the first rice farmers in the Mississippi Delta. People predicted that the irrigation would poison the ground (false). People predicted that the water would produce mosquitoes that could carry off kittens (true). My family did well with it, despite the naysayers.
Then they learned about the terrace subsidy.
One of my little brother's students took these pics of the farm a few years ago. This is the view from the east:

See that ditch to the right of the road? By our standards that was The Grand Canyon.
Here's what we saw when we looked north:

See that slight ridge running from left to right in this picture, halfway between the cameraman and the treeline? That's what we called a hill.
Our farm needed terraces about as much as the center tennis court at Wimbledon needed terraces.
One day, my father and uncle contacted The County Agent (think Hank Kimball from the Green Acres TV show) about the 18-inch high levees that ran through their rice fields. These levees were used to keep water spread evenly over each field. Imagine a topographical map of the Nevada Salt Flats, with a levee representing each change in elevation. Not many levees were needed. 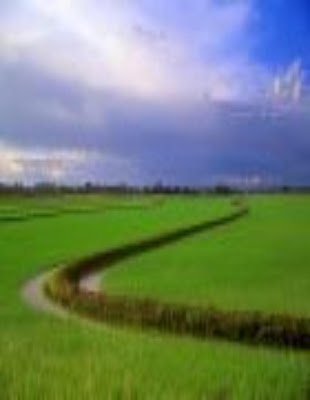 They asked the County Agent if the levees in their rice fields could be counted as terraces.
"Yep", the county agent said. "Those fields are terraced. Here's your paperwork to apply for some money."
The government money we received for our (ahem) terraced rice fields went a long way toward paying for the farm. We've never properly thanked the taxpayers for this gesture, and I'd like to do so now.
Thanks, suckers ! !
For the next twenty years, any time my father started ranting about gubmint giveaways, my mother would remind him of the terraces. He'd try to claim that counting levees as terraces was different, because he worked hard to grow all that rice.

My point is this: In order to get a huge amount of government money, the most saintly man I've ever known was willing to claim that his Mississippi Delta flatland had terraces. And the government's representative helped him do it.

Here's a summary of the problem, as stated by Dr. Thomas Sowell: "What counts in assessing a social or economic policy is not the stated intentions of promoters, but the incentives created and the actual end results produced."

Thanks again for all that money ! !

Picture of rice field irrigation from here, a site worth looking through whether you're interested in rice or not. Pics of the Guanxi rice field came from here.

Posted by The Whited Sepulchre at 9:15 PM 2 comments:

I apologize for the lack of posts for the last four days.
The comments on the previous post - plus the emails wondering if I'm alive - all of this has been gratifying. I had no idea how many people read this thing over breakfast !

I only have dial-up internet at home (soon to be remedied) but I also have a work-issued Sprint/Nextel wireless system.

Marvel Variants used the Sprint/Nextel antenna for a couple of weeks on some road trips. He didn't ASK for the antenna. He just sent someone from our I.T. department to collect it. This will cost him much Karma in his future lives (as an insect), and it will possibly cost him sales on his damn deformed funny books. God is not mocked. May the market be suddenly flooded with old variant comics. May thousands of them be discovered in every attic.

(Seriously, Marvel Variants is a great guy for someone who is going to hell.)

Anyway, I just couldn't get any mojo working on the dial-up system. Links and pics took forever. But now I'm back in bidness.

I owe Dr. Ralph several rebuttals, there's the Fort Worth gun show tomorrow (come by the Libertarian party booth !), Obama had a pointless press conference, Chrysler has gone bankrupt after borrowing a lot of your money, our Human Resources manager has objected to the coffee site in my Spiritual Advisors category, Bart Ehrmann has a new book out, Bob Dylan has a new CD, they didn't close my Starbucks, and I've offended some guy from an electric car website.

Arlen Specter, The Magic Bullet, The Stimulus Package, and gullibility in general

Senator Arlen Specter, who served The Mommy Party by allowing LBJ a smooth transition into the Oval Office, was the Warren Commission attorney who came up with the Single Bullet Theory. The Single Bullet Theory states that Lee Harvey Oswald selected the least likely spot in downtown Dallas to fire "The Magic Bullet", a bullet which somehow rattled around inside various politicians like a ball bearing inside a pinball machine for a few minutes.
The activity of the Magic Bullet is best described on the JFK Lancer site:

"According to the Warren Report the missile hit JFK in the posterior neck, then without striking any hard object passed through the neck to exit at the front of his throat. It then entered Texas Governor John B. Connally's back at the right arm pit, sliding along his fifth rib, demolishing four inches of the rib before it exited his chest below the right nipple. The bullet then allegedly struck and shattered the radius of the right wrist on the dorsal side, then exited at the base of his palm and hit his left thigh just about the knee. The Report then asserts that CE 399 traveled about three inches beneath the surface of the skin, hit the femur and deposited a lead fragment on the bone. Then, sometime later, with a spasm of reverse kinetic energy it spontaneously exited the hole in Connally's thigh and neatly tucked itself under the mattress of a stretcher parked in a hallway of the Parkland Memorial Hospital that the Report asserted was linked to the wounded governor. There it rested calmly under the mattress waiting for its rendezvous with history."

Is there anyone who can watch this video without wondering who was facing JFK's limo, instead of who was several floors above it?

Senator Specter went on to serve The Mommy Party by voting for the American Recovery and Reinvestment Act.
If he can believe in the Magic Bullet, then Obama's Recovery plan wasn't much of a stretch.

After a long career in service to The Mommy Party, Senator Specter is now formalizing the pre-existing arrangement by changing logos and becoming a formal member of The Mommy Party.
This is a disappointment to Libertarians everywhere, since Specter had long been used to prove that there really isn't much difference between the two factions running our government.
Posted by The Whited Sepulchre at 5:34 PM 4 comments: