Because of work responsibilities, I'm having to take a break from regular posting for a while.  I don't know how long this will last.  I haven't been able to make it to many any Libertarian Party events in the last two months.

Dang it, I'd just gotten this thing up to the 2,500 hits per day mark.  Oh well.  Most of this is because of the evil schemes of Marvel Variants and his sidekick Gary Dewdrop.

Obama, despite all his unh....weeks and weeks of management experience, has proven to be totally ineffective in helping the economy recover, defending the coasts, defending our border with Mexico, or controlling spending.
Global Warming Climate Change is now a laughingstock in Europe.
For the first time ever, Saint Albert Gore, The Goracle Of Music Tennessee, has been accused of sexually assaulting someone who isn't in the manufacturing or transportation industry.
The Keynesians are in full retreat, having discovered that governments can no more spend their way out of debt any more than individual households can.
Socialists in Europe are discovering that it really is possible to run out of other people's money.
Our November elections will probably give us a lot of new Representatives and Senators who are inexperienced, and therefore less harmful.

I hope to resume posting soon !

NEW YORK—Alarmed by the unhealthy choices they make every day, more and more Americans are calling on the government to enact legislation that will protect them from their own behavior.


The government is finally starting to take some responsibility for the effect my behavior has on others," said New York City resident Alec Haverchuk, 44, who is prohibited by law from smoking in restaurants and bars. "But we have a long way to go. I can still light up on city streets and in the privacy of my own home. I mean, legislators acknowledge that my cigarette smoke could give others cancer, but don't they care about me, too?"

"It's not just about Americans eating too many fries or cracking their skulls open when they fall off their bicycles," said Los Angeles resident Rebecca Burnie, 26. "It's a financial issue, too. I spend all my money on trendy clothes and a nightlife that I can't afford. I'm $23,000 in debt, but the credit-card companies keep letting me spend. It's obscene that the government allows those companies to allow me to do this to myself. Why do I pay my taxes?" 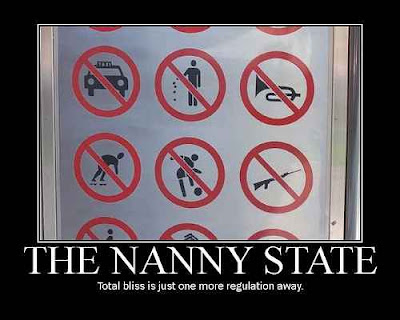 Go here to read the rest.  Brilliant.  Poster came from here.
Posted by The Whited Sepulchre at 5:49 AM 4 comments:

In which Bruce Yandle explains his "Bootleggers and Baptists" concept of government regulation.

While serving as the Executive Director of the Federal Trade Commission during the Reagan years, Bruce Yandle developed a theoretical framework he called "bootleggers and Baptists" to help make sense of regulatory dynamics. As the old story goes, when Baptists lobby for dry Sundays, it's the bootleggers who benefit. Yandle's insight was to point out that "bootlegger and Baptist" coalitions are surprisingly common in US politics. Paul Feine sat down to talk with Yandle about modern day examples of "bootleggers and Baptists."

And of course Bruce Yandle teaches at George Mason University, home of the dynamic duo at Cafe Hayek.
Posted by The Whited Sepulchre at 10:51 PM 1 comment:

I've been putting in 7-day weeks at Jukt Micronics, and haven't been able to post regularly.
However, when The Whited Mama sends something this funny, I have to make time ! 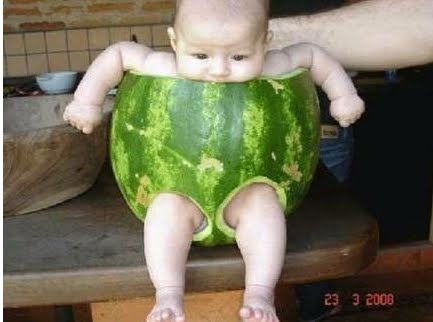