Despite all that, smartphones and pencils get made.  No one tries to plan the entire process, and if an individual or group tried to enforce a plan, the process would come to a halt.

Posted by The Whited Sepulchre at 11:14 AM No comments:

An Alternative To Obamacare

When Libertarians criticize and ridicule Obamacare, they often get slammed for not providing an alternative, or for not caring about the poor, or for not having a plan at all.

For a moment, please disregard the obvious reality of human action creating a spontaneous order, and the like.  Let's assume that someone has to write down a plan for the benefit of the Secular Theists out there.

Designate a three-square-mile area south of Fort Worth TX as a "Free Market Healthcare Zone".  (Back in the early 80's, China designated four cities as "Free Trade Zones" as an alternative to having citizens starve to death.  These zones were wildly successful, led to the present success of the Chinese economy and standard of living, and everyone is still scrambling to get in.)

In this Free Market Healthcare Zone, there would be no government regulations, only those regulations agreed to by the caregivers themselves (doctors, nurses, hospitals and pharmaceutical providers), and their customers.  Since the American insurance industry now has more government regulations than a nuclear waste dump, let's make this three-square mile area an Insurance Free Zone also.

If you walk into a doctor's office or hospital in the Free Market Healthcare Zone, the first thing they'll ask you to do is sign a waiver promising not to sue if things go badly.  (These agreements are currently illegal, BTW.)  Yes, there is a sacred belief in the Libertarian mindset that if someone does you harm, you are entitled to compensation.  But there is another, equally sacred belief about honoring contracts.  Please hang with me for a few more paragraphs....

The second thing you'll do is see a nurse.  I've never known a nurse who didn't believe she could do 90% of what an M.D. can do.  If the nurse thinks you need some penicillin, she'll sell you some penicillin.  Or give you a morphine shot.  Or give you five stitches.  It's up to the nurse.  She might even call in a doctor.  After giving you whatever treatment she thinks you need, you'll walk up to a desk and write a check for the full cost of the visit.

You might want to go only to a doctor who has been to a traditional medical school, one who will  have a little diploma on the wall stating that he's graduated, and has Rick Perry's permission to be a doctor in Texas.  Or you might be content to go to a doctor who has only been to DeVry.  Your choice.  Your life, your rules.

But what if someone, or some institution, consistently provides bad service with poor outcomes?  How would the FW TX FMHZ possibly deal with that problem?  It would be done in the same way that we deal with bad grocery stores, bad mechanics, Betamax cassettes, Yugos and failed TV sitcoms.  People would stop purchasing those services.

Things you will not have to pay for:  1) the involvement of a doctor, unless necessary, and 2) keeping the doctor and nurses safe from lawyers, and 3) a trip to the pharmacist, and 4) insurance overhead, and 5) Barack Obama's fantasies and delusions of being relevant to your health and well-being.

I have a good friend who is a Marine medic.  If I get cut by a piece of rusty sheet metal, I can get him to give me a tetanus shot and five stitches, as long as we're in the lawyer-free, insurance-free, regulation-free Obama-free Fort Worth, Texas, Free Market Healthcare Zone.  It's none of Barack Obama's business.  Or Rick Perry's.  Or the law firm of Screwem Goode and Harte's.

The same rules apply if I want to consult with some other dude who doesn't know much about stitches, but he's watched all of the YouTube videos.  I belong to me, you belong to you, and it really is none of your business.

At this point, no one in the United States can tell you what it costs to treat a broken arm.  It depends on your insurance.  Chances are, no one in the U.S. with a broken arm has personally paid for the treatment in the last ten years.  The check was written by an insurance company or by the government, or the care was provided for, at no charge, by a hospital that can't legally turn anyone away.  Prices will never, ever drop as long as the user isn't negotiating the payment for the service.

Would this Free Market Healthcare Zone concept cut America's healthcare expenses in half if every city had one?  Yes.

Would one day in the hospital go back to a level where it equaled about two day's pay?  I bet it would.

Would it force the American Medical Association to start training more doctors?  Yes.  (BTW, things are more expensive when they are scarce, and the AMA creates an artificial scarcity by only releasing so many doctors into the market every year.)

Would the level of innovation in these Free Market Zones possibly triple that of the current system?  Let's see... Risk wouldn't be punished, regulations wouldn't get in the way, and creativity would actually be rewarded.  I believe that's a yes.  There might even find a cure for cancer in that environment.

Would more poor people be able to afford healthcare?  You betcha.

Would more and more doctors and nurses be able to go back to treating indigent patients at no charge?  I bet they would.

This would be so beautiful, and IMHO, so easy.  Give up the right to sue.  Stop worrying about whether the doctor or nurse has a certification from Rick Perry.  Get the insurance bureaucracy out of the way.

We could do it next year, but we're just too compassionate to give up the trial lawyers, the insurance execs, and the Department Of Health And Human Services.....

Matthew McConaughey is starring in a new movie that'll be released in December called "Dallas Buyers Club", about a guy with AIDS who battled the bureaucracy to create something of his own very similar to a Fort Worth Free Market Healthcare Zone.  All of it illegal, of course.  Can't wait to see it.

Posted by The Whited Sepulchre at 6:13 PM No comments:

I guess this means we are doomed. 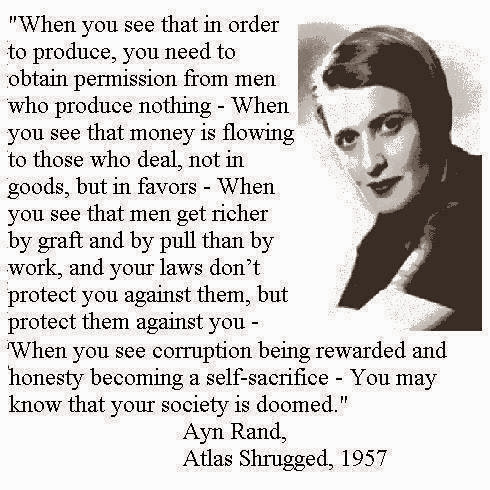 Frank Zappa on "Having A Strong Military"

Here's rocker Frank Zappa on the need for a strong military.  Or not. 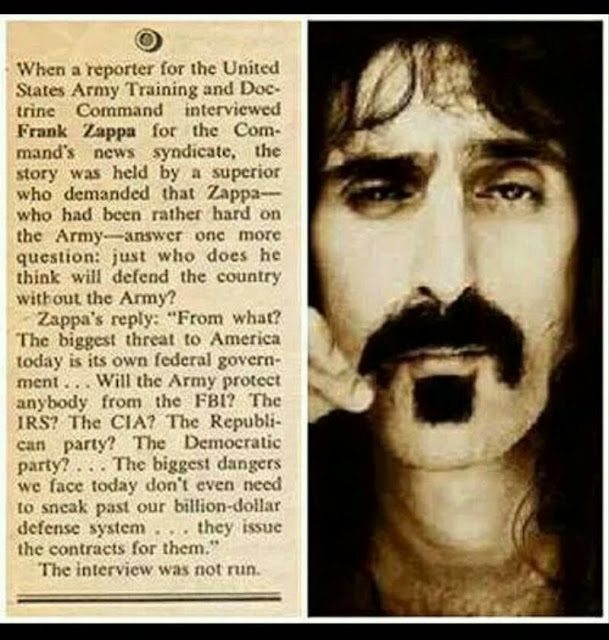 And here's some Zappa vs The U.S. Senate.  The Goracle shows up around the 7:00 minute mark.  (His ex-wife, Tipper, was a Zappa enemy, and was probably responsible for this show trial.)