Someone finally did it.  Thank God.
(CNN) -- The Standard & Poor's rating agency announced Friday that it has downgraded the U.S. credit rating to AA+ from its top rank of AAA.
Our national debt is now 100% of GDP.  Think of your yearly household income.  Go in debt by that amount.  Can you pay it off?  Didn't think so.
Think of the yearly household income of your supermarket shelf-stocker.  Put him in debt by that amount.  Can he pay it off?  Didn't think so.
Ditto for Bill Gates and the guy who mows your yard and everyone else you know.

(Yeah, I know there's a difference between yearly income and yearly production.  The analogy works the same way, though.)
"The downgrade reflects our opinion that the fiscal consolidation plan that Congress and the administration recently agreed to falls short of what, in our view, would be necessary to stabilize the government's medium-term debt dynamics," the agency said about the move, which was announced after the markets had closed.
Rating agencies -- S&P, Moody's and Fitch -- analyze risk and give debt a grade that is supposed to reflect the borrower's ability to repay its loans. 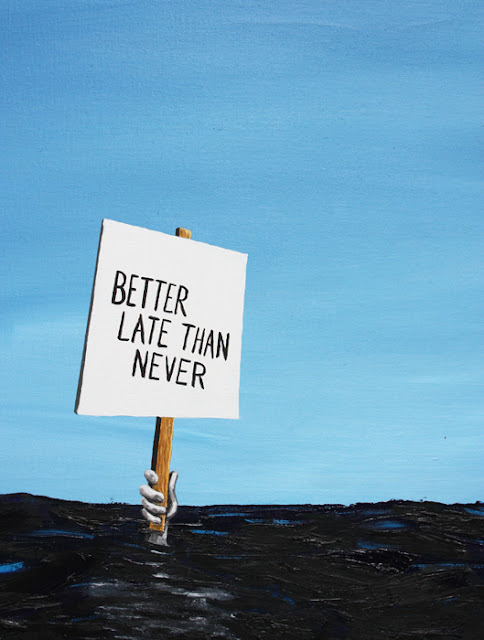 The safest bets are stamped AAA. That's where U.S. debt has stood for years. Moody's first assigned the United States a AAA rating in 1917.
Fitch and Moody's, the other two main credit ratings agencies, maintained the AAA rating for the United States after this week's debt deal, though Moody's lowered its outlook on U.S. debt to "negative."
What the hell are they waiting on?  This is like a fleet of submarines going deep into the Atlantic to consider putting some more lifeboats and safety equipment on the Titanic.  The disaster has already happened.  We're on the hook for the money.  The Republicrats recently joined hands with the Demoblicans to increase the debt goal by another 2 trillion dollars that we'll never ever pay back.
Don't say I didn't warn you.  I'm looking out for your best interests, even if Fitch and Moody's aren't.
End of rant.
Posted by The Whited Sepulchre at 1:18 PM 4 comments:

Fred Bastiat Quote Of The Day

“Poor people!” he lamented of the duped French populace in the same tumultuous year [1848]. “How much disillusionment is in store for them! It would have been so simple and so just to ease their burden by decreasing their taxes; they want to achieve this through the plentiful bounty of the state and they cannot see that the whole mechanism consists in taking away ten to give it back eight, not to mention the true freedom that will be destroyed in the operation!” - Frederic Bastiat
From The Coyote Blog 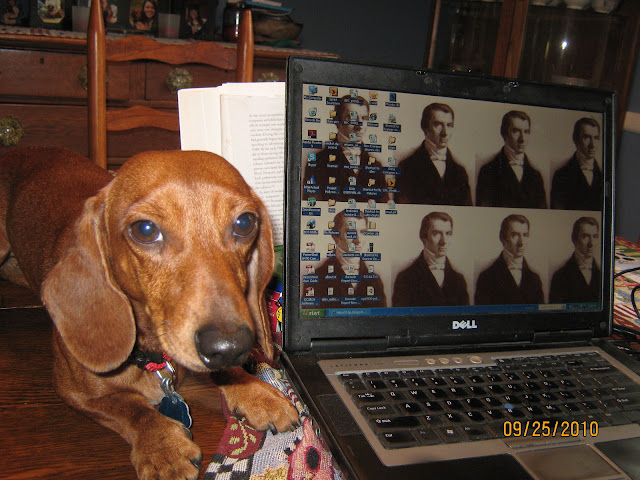 Libertarian Street Art - Who Will Watch The Watchers? 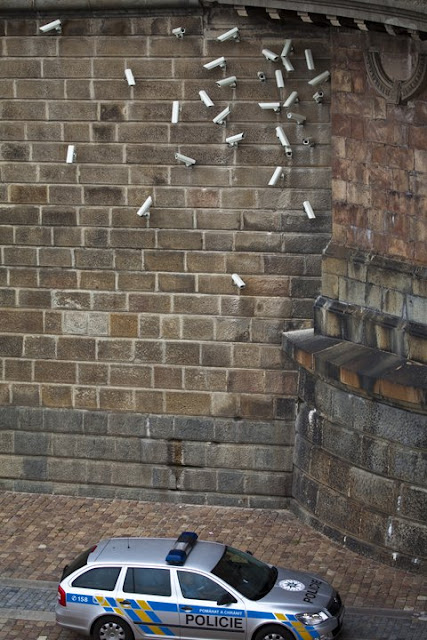 Email ThisBlogThis!Share to TwitterShare to FacebookShare to Pinterest
Labels: pictures worth a thousand words, privacy, who will watch the watchers

Quote Of The Day, on Greed

I saw this little gem at the Libertarian News blog.
"It’s true: greed has had a very bad press. I frankly don’t see anything wrong with greed. I think that the people who are always attacking greed would be more consistent with their position if they refused their next salary increase." – Murray N. Rothbard
Posted by The Whited Sepulchre at 7:39 AM No comments:

69% of Americans believe that it is likely that scientists have falsified Global Warming / Cooling / Climate Change research.
In related news, GM sold only 125 Chevy Volts last month.
Posted by The Whited Sepulchre at 7:55 AM 9 comments:

From the comedic greatness of Vice President Joe Biden:


Posted by The Whited Sepulchre at 8:04 AM No comments:

Why I love the war on drugs

I hire a lot of ex-convicts.  Sometimes they are a bargain.
Think about it.  Imagine a 25-year-old who would be making 50K per year in a just and fair world, based on his intelligence, computer skills, and work ethic.  But suppose he got caught up in the George Bush/Barack Obama War On Drugs because of possession of a trifling amount of a weed, and he now has some prison time on his record.
He is now lucky to get minimum wage.
My company pays most people a lot more than minimum, but not for employees that no one else will hire.  We sometimes can hire ex-convict geniuses for 9 bucks an hour.
If you're willing to put up with employees having to leave work at odd hours to waste time meeting with probation officers, parole officers, government counselors and other bureaucratic pygmies, ex-cons are a bargain.
It doesn't seem fair, does it?  I get great employees for half-price !!   Thank you Democrats !!!!
So what should be done about my unfair advantage?  Well, a nation that didn't have its head up its collective ass would legalize marijuana use and possession, along with other victimless crimes.  We have 6% of the world's population and 25% of its convicts.  We do love turning our children into Food For The Machine.
San Francisco is now debating what to do about my discriminatory practices.  Are they going to legalize marijuana in their city?  Make it legal for entrepreneurs to sell plants without a permit?
Oh no.  Nothing like that.  They're going to leave all the current laws in place, but make it illegal for anyone to ask about convictions.  I swear to God, that's the approach they're taking.  Here's a quote from the Coyote Blog:
A legislative proposal in San Francisco seeks to make ex-cons and felons a protected class, along with existing categories of residents like African-Americans, people with disabilities and pregnant women. If passed by city supervisors, landlords and employers would be prohibited from asking applicants about their criminal past. [...]According to The City’s Human Rights Commission, San Francisco has the highest recidivism rate of any big city in California, almost 80 percent. With an influx of new prisoners set to be released because of the state’s budget crisis, supporters argue felons need legal protections before they’re disqualified simply because of their record, which could be decades old and for crimes that have nothing to do with the job they’re hoping to get.

Yep.  They're going to continue ruining lives because, after all, jailers, probation officers, parole officers, counselors, border patrol guards, Narcs, and SWAT teams need jobs.  But they're going to make it illegal to ask about it.
I love being alive, just for moments like this.
Posted by The Whited Sepulchre at 6:31 AM 2 comments:

From Tarrant County Libertarian Party Chair John Spivey's Facebook page:
Hey Federal Reserve fans! I just did some fun research - Shortly after the Fed was hatched, in 1916, Chevy released it's "Model-T Slayer", the 490! Very slick, this roadster with the optional "full electrical system" ran $550 or 28.9 ounces of gold. Today, the Chevy's roadster, the Camaro Convertible 2 SS with several fun options runs $47,145... or 28.3 OUNCES OF GOLD! ALMOST EXACTLY THE SAME!!!!!!

Posted by The Whited Sepulchre at 5:40 AM 2 comments:

On "The Tea Party's War With America"

Joe Nocera has an editorial in The New York Holy Times that almost perfectly illustrates the difference between the Statist and Libertarian mindsets.  Fisking the entire thing would grow tiresome, but the main points show up in the first few paragraphs.
Here's Mr. Nocera:


You know what they say: Never negotiate with terrorists. It only encourages them.
You know what's coming after that, right?  Yeah.  The people who want more freedom for themselves and for others are "terrorists".  To paraphrase an Instapundit commenter,  "This has to be the first ‘Terrorist’ movement in the history of mankind that, if it gets everything it wants…will leave you the hell alone.”
Back to Mr. Nocera:

These last few months, much of the country has watched in horror as the Tea Party Republicans have waged jihad on the American people.
Oh for the love of God.  Washington D.C. has indebted every f-ing taxpayer with a $130,000.00 bar tab.  The Statists want to increase that debt.  They've already doubled the debt since Bill Clinton left office.  The Tea Party Republicans have trotted out a 2.4 trillion in cuts (over 10 years), a 2.4 trillion that will be cut out of future increases, not from the current geysers of gloppy glutinous pork.  And these people making the pitiful little efforts to reduce the spending are jihadists ????
Back to Mr. Nocera:
Their intransigent demands for deep spending cuts, coupled with their almost gleeful willingness to destroy one of America’s most invaluable assets, its full faith and credit, were incredibly irresponsible. But they didn’t care. Their goal, they believed, was worth blowing up the country for, if that’s what it took.
I, for one, don't want America to have any more credit.  I want those Chinese bastards to stop mailing credit cards to Nancy Pelosi and John Boehner.  I want it to stop now.  I don't want my daughter to be burdened for the rest of her life with paying for George Bush and Barack Obama's ineffective wars on poverty, illiteracy, inflation, unemployment and brown people.
Seriously, can you imagine a credit card company sending a card application to a person whose debt was 100% of his yearly income?
Mr. Nocera thinks it would be a great idea.  Otherwise, things would, er....change.
Like ideologues everywhere, they scorned compromise. When John Boehner, the House speaker, tried to cut a deal with President Obama that included some modest revenue increases, they humiliated him. After this latest agreement was finally struck on Sunday night — amounting to a near-complete capitulation by Obama — Tea Party members went on Fox News to complain that it only called for $2.4 trillion in cuts, instead of $4 trillion. It was head-spinning.
Well, numb-nuts, we are 14 trillion dollars in debt.  A 4 trillion dollar cut over a ten year period is nothing.  2.4 trillion cut from a 10 year period doesn't even cover the defict of each year.
The "Tea Party" Republicans have suffered a hellish defeat.  Despite all the howling and cloth-rending from the Statist side, nothing has changed.  This is 100% business as usual.
There's no point in going further with this.  Hit the link to read the rest of Nocera's editorial, in which he explains why taking money away from legit job producers and giving it to bureaucrats is the best way to end unemployment.  Gag me with a dirty diaper.
Posted by The Whited Sepulchre at 5:05 PM 3 comments:

Email ThisBlogThis!Share to TwitterShare to FacebookShare to Pinterest
Labels: drunken rants, national debt, New York Times, People Who Are Off By Several Orders Of Magnitude

Debt Ceiling Quote Of The Day

The Debt Ceiling should be renamed "The National Debt Target" - Peter Schiff
To understand that quote is to understand the nature of the problem.
Posted by The Whited Sepulchre at 7:38 AM 3 comments:

This is the best thing I've seen on our habit of passing our bills on to the unborn.  The clip of Harry Reid holding the little zygotes at gunpoint is classic.
Posted by The Whited Sepulchre at 11:43 AM No comments: