Boris Johnson for Mayor of London

An Eton-educated libertarian with a reputation as a bumbling, fumbling comedian is running for mayor of London. Here is Boris Johnson, as quoted in Time magazine: "I'm a libertarian. I think people should get on with their lives as far as possible independently of bossiness and intrusion of all kinds." 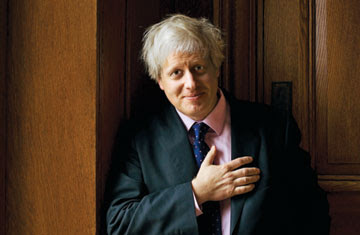 Contrast that approach with this quote from Hillary Clinton: I have a million ideas. I can't do all of them. I happen to think in running a disciplined campaign--especially when it comes to fiscal responsibility, which is what I'm trying to do--everything I propose I have to pay for. You know, you go to my website, you'll see what I would use to pay for what I've proposed. So I've got a lot of ideas, I just obviously can't propose them all. I can't afford them all. The country can't afford them all."

Here's Johnson on "Convictions", as quoted by the always interesting Catherine Mayer :

Readers not yet acquainted with his signature style will get a flavor of it from this verbatim response to TIME's question about whether he considers himself a conviction politician. (For full impact, the passage must be declaimed in the poshest of English accents.) "I certainly have a range of convictions. Not for anything serious. God. I don't have convictions actually by the way. No, no, no. Sorry, I don't have any convictions in a court of law, apart from speeding when I was very young. But I have plenty of political convictions. Can you rescue me? God."

Johnson and Governator Arnold Schwarzenegger once addressed a Tory party conference (Arnold by video link), and Johnson was doing one of his comedy routines. Arnold loudly objected to both the content and the delivery style, not knowing his microphone was switched on.....Johnson later gave this mock apology: "A man not famed for his eloquence found fault with my delivery and general mastery of public speaking. And these are things I obviously have to overcome."

In Boris Johnson's case, the apple didn't fall very far from the tree. Here's a line from his father, Stanley Johnson, a former member of the European Parliament. The elder Johnson defines Libertarianism as "the fight against crooks and nannies looking into nooks and crannies."

(All of this is from Catherine Mayer, in Time.)

There's been some controversy surrounding Johnson's refusal to be trumped by anyone playing a victim card. See Samizdata for details. Most of the comments below the Samizdata post are worthy of printing, commiting to memory, and memorializing on a needlepoint sampler. (Someone actually uses the phrase "Crikey Moses", which is nice to hear outside of a Harry Potter novel.)

Here's one last Johnson quote, about his wonderful tendency to say whatever comes into his head: "Things come into my head that I find simply impossible not to say and then all sorts of chaos breaks out. But I think it's much better that way than endlessly pre-rehearsing, sanitizing, homogenizing, pasteurizing everything you say to the point of macrobiotic extinction."

As someone who has watched the over-sanitized U.S. presidential debates to the point of drooling on the rug, I hope Boris Johnson gets elected Mayor of London, bumbling, fumbling, or not.

May his tribe increase.
Posted by The Whited Sepulchre at 8:16 AM No comments:

Benny Hinn set to a soundtrack from Drowning Pool.
This is an old video, but it's new to me. I want to be able to find this at a moment's notice for the rest of my life.
I'll never again hear this song the same way.

Posted by The Whited Sepulchre at 10:37 PM No comments:

I'm working in Canada this week, but got a very excited phone call from my daughter back home in Texas.
She got an acceptance letter in the mail today from Texas A&M, where she plans to go to veterinary school. Looks like we'll have an Aggie in the house.
Go Mary ! ! !
Later on, I'll do a post about where to mail the college fund donations.
Posted by The Whited Sepulchre at 10:22 PM 2 comments:

See Comments below....These guys deserve a medal for trying to save $355.00 from the grasp of the government beast.

Corpse Wheeled to Check-Cashing Store Leads to 2 Arrests
By BRUCE LAMBERT and CHRISTINE HAUSER
Even for the once-notorious Hell’s Kitchen neighborhood, it may have been a first: Two men were arrested on Tuesday after pushing a corpse, seated in an office chair, along the sidewalk to a check-cashing store to cash the dead man’s Social Security check, the police said.
When Virgilio Cintron, 66, died at his apartment at 436 West 52nd Street recently, his roommate and a friend saw an opportunity to cash his $355 check, the police said.
They did not go about it the easy way, the police said, choosing a ruse that resembled the plot of “Weekend at Bernie’s,” a film about two young men who prop up their dead employer to pretend that he is alive.
“Hell’s Kitchen has a rich history,” said Paul J. Browne, a police spokesman, “but this is one for the books.”
There was no sign of foul play in Mr. Cintron’s death, he added.
The roommate, James P. O’Hare, and his friend, David J. Dalaia, both 65 and unemployed, placed Mr. Cintron’s body in the chair and wheeled it around the corner, south along Ninth Avenue on Tuesday afternoon, the police said. The men parked the chair with the corpse in front of Pay-O-Matic at 763 Ninth Avenue, a check-cashing business that Mr. Cintron had patronized.
They went inside to present the check, but a clerk said Mr. Cintron would have to cash it himself, and asked where he was, the police said.
“He is outside,” Mr. O’Hare said, indicating the body in the chair, according to Mr. Browne.
The two men started to bring the chair inside, but it was too late.
Their sidewalk procession had already attracted the stares of passers-by who were startled by the sight of the body flopping from side to side as the two men tried to prop it up, the police said. The late Mr. Cintron was dressed in a faded black T-shirt and blue-and-white sneakers. His pants were pulled up part of the way, and his midsection was covered by a jacket, the police said. While the two men were inside the check-cashing office, a small crowd had gathered around the chair. A detective, Travis Rapp, eating a late lunch at a nearby Empanada Mama saw the crowd and notified the Midtown North station house.
Police officers and an ambulance arrived as the two men were trying to maneuver the corpse and chair into the check-cashing office.
The two men were taken into custody and questioned. The police said they were considering charging them with check-cashing fraud.
Mr. Cintron’s body was taken to a hospital morgue. The medical examiner’s office said its preliminary assessment was that he had died of natural causes within the past 24 hours.

This leads to the question: If we can continue paying subsidies to farmers for years after they're dead, how come these guys got arrested? Mr. Cintron wasn't going to use the money, and the government woulda wasted it....
Posted by The Whited Sepulchre at 10:10 PM 1 comment:

Hillary Clinton, Under The Radar

Almost every poll was wrong. Barack Obama was supposed to walk away with the New Hampshire primary. Hillary Clinton won it.

(Disclaimer - Now that Joseph Biden has pulled out of the race, if I had to vote for a Democrat, and I'm talking with a gun to my head, I'd go for Obama.)

I've only seen the polls this screwy in one other state: Louisiana.

Arch-racist and former Klan leader David Duke ran for several Louisiana ofices in the early 1990's. He was, and is, crazier than a rodeo goat. The polling was always off when Duke was in a race - the general theory being that people were ashamed to admit Duke support to a pollster. Therefore Duke always did better in the elections than anticipated.

Duke sometimes said that his support flew under the radar (i.e. couldn't be tracked).

The collected wisdom on yesterday's polling debacle is that Obama's numbers were accurate, and with a very slight surge. But Hillary had an even bigger surge among the undecideds.

What does this have to do with David Duke?

Is it possible that the support was always there for Hillary Clinton, but among people whose Political Correctness levels won't allow them to admit they don't support an African-American candidate? Not even in an exit poll, much less in a pre-election survey?

I'm not trying to imply that any of Clinton's supporters are racist. But I do believe that the polling vs. the election results prove that a lot of Clinton supporters don't want to be perceived as racist either.

Political Correctness - 1
Truth - O
Posted by The Whited Sepulchre at 6:00 AM 2 comments:

Stick a Fork in Hillary....She is Done !

"Electronic Village", the best African-American Political Blog, has declared "Stick a Fork in Hillary....She is Done !"

Yesterday on Meet The Press, Mike Murphy was saying that if Hillary didn't do something differently, she would turn into "Ed Muskie in a pantsuit". I didn't get the reference until I read these guys.

Also, they have a good link/post called "How To Market Your Blog in 2008."

Ok, I've got to leave politics alone for a while. It's a long time until November.
Posted by The Whited Sepulchre at 9:21 PM 2 comments: 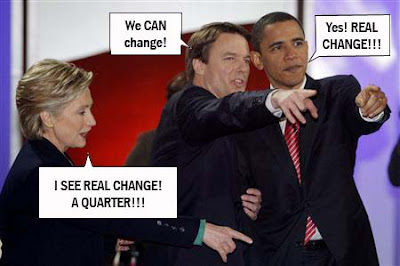 From Babblin5:
See comments about CHANGE on my previous post.
These are the biggest defenders of the Status Quo on this planet.
Posted by The Whited Sepulchre at 6:16 PM 1 comment: 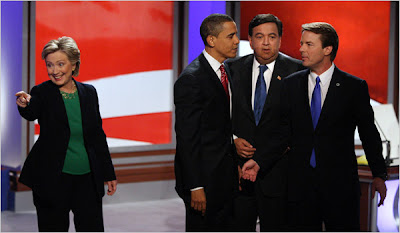 A Black Man, A Hispanic, and A Metrosexual walk into a debate.....
(supply your own punchline.)
I listened to most of the New Hampshire Democratic Presidential Debate on the radio. Lord have mercy, Barack and Edwards were dogpiling Hillary again. They were tag-teaming that woman. Don't get me wrong, I think she would be the worst President of all the people on that stage, but it was a horrible thing to listen to.
Richardson, who is running for somebody's Vice President, was trying to play the voice of healing and reason.
Someone with a lot of patience should go through the transcript and see how many times the word "Change" was used.
Do they really think that if Democrats want "Change", Democrats will be impressed with how often a candidate uses the word?
I've live-blogged several of these things, but it's getting where I know what they're going to say before they say it.
Posted by The Whited Sepulchre at 7:24 AM No comments: