Senator Elizabeth Warren, the Moses Of Massachusetts, recently spent some quality time with Jehovah atop Mt. Sinai, and came down from the mountaintop with "The 11 Commandments Of Progressivism". 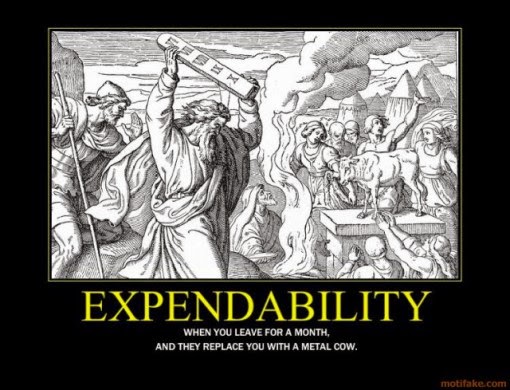 First, let's straighten out some terminology.  The American Left routinely violates the English language by using words to mean whatever the hell they want them to mean.  For instance, I'm a Liberal.  It's a great old word, coming from the same root as liberty, liberate, libertarian, and liberation.

The American Left seemed to start off as "The Progressive Movement", then morphed into "Liberals", and then after defiling that fine old word, refashioned themselves as "Progressives".

Here's Michael Barone, explaining some of the transition:

Liberals just aren't very liberal these days. The word "liberal" comes from the Latin word meaning freedom, and in the 19th century, liberals in this country and abroad stood for free speech, free exercise of religion, free markets, free trade -- for minimal state interference in people's lives.
In the 20th-century, New Dealers revised this definition by arguing that people had a right not only to free speech and freedom of religion but also, as Franklin Roosevelt said in his 1941 Four Freedoms speech, freedom from fear and from want.
Freedom from want meant, for Roosevelt, government provision of jobs, housing, health care and food. And so government would have to be much larger, more expensive and more intrusive than ever before.
That's what liberalism has come to mean in America (in Europe it still has the old meaning), and much of the Obama Democrats' agenda are logical outgrowths -- Obamacare, the vast expansion of food stamps, attempted assistance to underwater homeowners.

I do not believe that someone should be forced to hire stoners, forced to bake cakes for gay weddings, or forced to pay for someone else's morning-after birth control pills.  In the old-school sense of the word, that makes me a.... Liberal.

So I'm glad that Senator Warren, the Moses Of Massachusetts, has decided to change her label to "Progressive".  Progressive means "someone who wants to take your stuff".

The 11 Commandments Of Progressivism !!
Share This Story Share This Story
- "We believe that Wall Street needs stronger rules and tougher enforcement, and we're willing to fight for it."

Wall Street already has more rules than the freakin' Koran.  The Securities And Exchange Commission has a budget of 1.32 billion dollars.  Stock purchasing and trading is already one of the most regulated activities on Earth.
On top of that, Elizabeth Warren's Democrat tribe held the Presidency, the House of Representatives, and the Senate in the time period immediately after the recent Wall Street fiascos.  Nobody on Wall Street went to jail.
Elizabeth Warren wants more power and control and money for government.  It really is that simple.

- "We believe in science, and that means that we have a responsibility to protect this Earth."

I believe in science.  I believe that I have a responsibility to protect this Earth.  (What's up with her saying "this Earth"?  Do we have undiscovered responsibilities to protect other Earths?  And will this require additional funding?)
I do not believe that protecting this (or any other) Earth obligates me to give money to Barack and Elizabeth and The Goracle.
I will believe that my activity influences the weather when those three jet-setters start acting like their activity influences the weather.  Canadian Geese spend less time in the air than those three con-artists.

- "We believe that the Internet shouldn't be rigged to benefit big corporations, and that means real net neutrality."

Good Lord in heaven....  If we were to discover that some internet service provider was rigging searches, we could drop them like a hot potato.  Leave it to the customer.  End of story.

For instance, the Progressives who run Google have de-emphasized their Blogger/BlogSpot service (the one that hosts this blog) in the Google search algorithm.
I believe that there is a 5 to 1 ratio of Libertarian/Conservative bloggers to Liberal/Progressive bloggers.
It is far more effective for Google to stifle blog search results than it is for them to contribute $$$ to Progressive candidates.
I can't prove any of this.  I don't want Washington, or Senator Elizabeth Warren, or Rand Paul to spend a dime trying to prove this.  It's a dumbass conspiracy theory of mine.
It's Google's company, and they can run it however they choose.  Google gives me this blog site for free, and I can start paying for Wordpress or something else if I choose to do so.  Until then, I shouldn't do any bitching about my delusions of Google violating net neutrality.

- "We believe that no one should work full-time and still live in poverty, and that means raising the minimum wage."

And this will guarantee that more low-skilled workers won't work at all, and will live in poverty.
If I become king and arbitrarily set the minimum selling price on all cars at $50,000.00, you're going to by a Mercedes every single time.  That used, beat-up 1975 Volkswagen Beetle will go unpurchased at $50,000.00
The minimum wage was first put in place in the U.S. to keep (black) poor workers from taking (white) middle-class jobs.  It has always worked precisely as intended.

- "We believe that fast-food workers deserve a livable wage, and that means that when they take to the picket line, we are proud to fight alongside them."

Elizabeth, you ignorant slut.
McDonald's, Whataburger, Wendy's and Burger King hire the people that Harvard, M.I.T., Bell Helicopter, Google, Microsoft, Yale, and NASA refuse to hire.  Elizabeth, you have refused to hire those fast-food workers.
Don't take to the picket line.  Stop marching.  Stop bitching and moaning about the low wages offered by others.  Hire those people.  It's easy to make money off of low-skilled labor, right?
And in your spare time, look up the black teen unemployment rate.  Do you really want to price even more of those kids out of a job?  Or are you just trying to get traction from an issue that polls well with Low Information Voters Progressives?

- "We believe that students are entitled to get an education without being crushed by debt."

Then for the love of God, please end government's near-monopoly on higher education.
Fire Thomas J. Perez, the Luddite son of a bitch who is now the Secretary Of Labor.  (You know, the guy who, when working for the Justice Department, prevented universities from using the Kindle, because Kindles discriminate against blind people.)
End lifetime employment guarantees for under-worked academics.
Investigate the possibility that government loans just might be the reason universities can jack up their prices to ridiculous levels.
Give people a freakin' choice.  There is no reason why a course in Western Civilization should cost more than it did in 1950 (adjusted for inflation).
We're dealing with cartels, not classrooms.

- "We believe that after a lifetime of work, people are entitled to retire with dignity, and that means protecting Social Security, Medicare, and pensions."

Too late.  Social Security and Medicare are both bankrupt.  Gone.  They've spent it all.

- "We believe—I can't believe I have to say this in 2014—we believe in equal pay for equal work."

Think of all the people who came into your workplace with the exact same background, education and training.
Then eliminate everyone all those who don't perform your same job in your department.
Then eliminate those who are better workers than you and those who are worse workers than you.
In Elizabeth Warren's world, the remaining people are those who should be paid the same as you.
Could you think of anybody?
No?  There's no one else with your identical training, education, certifications, pedigrees, work ethic, punctuality, attitude, result, profit margins, congeniality, and downright awesomeness?

That's why the "equal pay for equal work" theme is nothing but a feast for lawyers.

This is a meaning less statement.  Dell Computer means Dell Computer.  Tape dispenser means tape dispenser.  Stapler means stapler, and phone means phone (to name just a few of the things on my desk.)
I don't know how this Word Pasta made it into the commandments.

- "We believe that immigration has made this country strong and vibrant, and that means reform."

I agree.
But "reform" is another one of those words that the American Left has desecrated.
Thanks to "Healthcare Reform" and "Campaign Finance Reform", the word "Reform" now means to take something and f**k it up beyond all recognition.
How 'bout we change that commandment to "We believe that immigration has made this country strong and vibrant, and therefore we favor Open Borders."

Corporations are comprised of groups of people.  They're sure as hell taxed like they're people.  And, to a lesser extent, they can be sued like people.
Women have a right to their own bodies, because they are people.
People do have a right to their bodies.
It follows that people have a right to the goods and services produced by their bodies and minds.
Therefore, no individual or corporation should be in charge of providing healthcare, child support, income tax withholding, Social Security contributions, Medicare, Medicaid, or 40 acres and a mule to anyone.
Putting companies in between people and government (for tax withholding, etc.) is a structure that began as one of FDR's many wartime mistakes, and it should end now.

And the main tenet of conservatives' philosophy, according to Warren? "I got mine. The rest of you are on your own."

And Elizabeth Warren's philosophy is "You got yours.  And I want it."
Go here to read about Warren's support for the Corporate Welfare Bank.

God Almighty, I'm glad I got this out of my system. 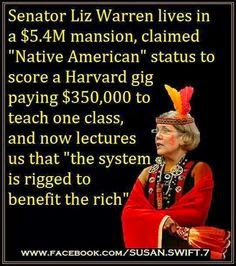 Posted by The Whited Sepulchre at 11:36 AM 5 comments: