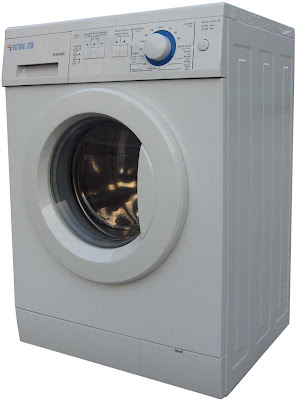 I've been posting old emails from my China trips any time I'm too tired to think but too wired to sleep. This one's from a little more than a year ago, when I made a Quality Control trip to a vendor called "Aifei" in Xiamen.

I hope everyone is doing well. I still don’t have Internet access at the new apartment, and haven’t had much free time outside of working at the factory and getting moved into the new place. I’m writing from the Coffee Bar near our new apartment.

Our company apartment is bigger, nicer, and more luxurious than anything that 99% of the Chinese can afford, or have ever seen. I never doubt for a moment that I’ve been blessed, and am very fortunate to have been born where I was born.

All that obligatory gratitude aside, the apartment was designed to look like the Jettson’s. Unfortunately, the utilities were provided by The Flintstones. It’s on the 27th floor of a high-rise that’s still being built by small angry people with lots of hammers.

To the left of the sink is the space where the microwave ought to be. But that’s the only space where I can chop up whatever small animals that I’m having for dinner. (The food suppliers, restaurants, and I have a mutual “Don’t Ask, Don’t Tell” policy....) So the microwave stays on top of the fridge until needed. There is a dual surface gas cooktop that works great.

Below that is a Thing that’s not quite a Dishwasher. They call if a “sterilizer”. When I asked Wendy why I needed the sterilizer after the dishes had already been hand washed, she said “Bad Water”. I know all about the Bad Water from the medical disaster of my first trip. She also suggested that I leave the dishes in the sterilizer at all times. I asked why. She said “Bad Air”. Considering that they’re always burning huge piles of leftover Asbestos, DDT, Napalm, Agent Orange, etc. all over the countryside, I’m taking her advice. Good Karma.

The refrigerator is small, but will keep beer cold. The only ice trays they sell here are about the size of two playing cards placed end to end. The ice is all dice-sized cubelets. Made from Sparklett’s, because of Bad Water. A minor hassle.

I’ve got two great balconies. One of them overlooks other high-rises, but the other one has a great view of the lake and the bay. That’s where I have my new washer/dryer. (All in one machine.) It has two digital dials, and about 20 buttons. The owner’s manual is only in Chinese, which I’m slowly trying to translate with a Character-Finder dictionary (don’t ask how that works, it’s too tiresome to explain. But I feel like I’m on the Medieval Committee that turned all the Greek, Latin, and Hebrew into the King James Bible.)

For reasons that I don’t understand, this Washing Machine can be programmed to wash one load for up to 20 hours. Yes, 20 hours. I think it has a similar capability for drying times, but I’m afraid to find out. I might incinerate something.

Combine all this with a safety feature that won’t let you open the door when there is ANY water or ANY heat in the machine, and it’s time for ADVENTURES IN LAUNDRY ! ! ! My first load washed for about 3 hours, and dried for about half that many. I don’t have accurate times for the 2nd load on Sunday, because there was a lot of starting and stopping involved - I’d call it 9 hours total. Every time I tried to move from washing to drying, it started a new wash cycle for a random length of time. And of course, the door wouldn’t open. Then, when I did persuade it to go from wash to dry, after about 3 hours of drying, the damn door still wouldn’t open because of the excessive heat.

It was ridiculous. My shirts were held hostage. All the crowbars were back at the factory.

Most businesses here have a little Buddhist mini-shrine/altar somewhere on the premises. They burn incense on the altar in front of the Buddha statue about twice a day. If things are going badly, they will even place sacrificial fruit in front of the statue (apples, oranges, plums, etc. etc etc. Some people try to fake it with plastic fruit, but I bet that doesn’t work as well..)

Anyway, I thought it would make for a funny photo to show Wendy if I took a picture of some fruit in front of my washing machine, as a sort of hostage exchange for my shirts. I put some bananas, oranges, and grapes on the balcony in front of the washer, and went to get my camera. When I went back on the balcony to take the picture, the door was open. The Chinese Washing Machine was apparently satisfied with my offering.

You can’t make this stuff up

My shirts had been washed so many times they were almost transparent. And they will now fit my little daughter perfectly.

The washer/dryer works very hard, and it works for long, long hours. It’s very complicated. And you’re not going to get anything out of it until it’s ready to give it to you. So I’ve named it Aifei….

My driver just showed up to take me to the factory.

There’s more to tell, like the hot water heater that doesn’t hook to either of the sinks or to the shower, but maybe is what keeps the toilet water so nice and toasty. The bed has a Chinese-style mattress - a term I wasn’t familiar with until this trip. “Chinese Style Mattress” translates into English as “If you have a Basketball, you can dribble on it.” But this email is already over-long. This coffee bar has 6 CD’s in the music rotation, and one of them is Christmas music. When “Joy to the World” comes over the speakers, the Chinese workers and customers don’t know the difference, but all the Westerners in the place look up from their laptops and smile at each other. It’s great. I’ve met people from all over the world in this place. I love this country.

Click here for The Infamous Chinese Dog Story
Posted by The Whited Sepulchre at 10:20 PM

Email ThisBlogThis!Share to TwitterShare to FacebookShare to Pinterest
Labels: China