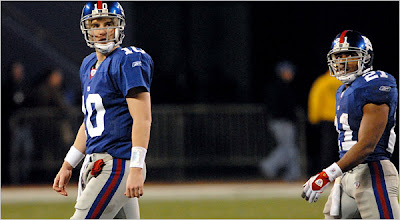 I've been meaning to post something about the Eli Manning / Tiki Barber controversy since last August, but haven't had a chance until now....The following links are from August of last year.

Tiki Barber, the New York Giants running back who retired from the NFL to enter the broadcast booth, has ripped Giants quarterback Eli Manning for his weak leadership skills.

Barber, who further demoralized his team by announcing his retirement decision in mid-season last year, declared that Manning's attempts at team meetings were often "comical".
A few days later, Tiki and his brother Ronde appeared on a Sirius Radio program, and mocked Manning a second time:

It was a constant barrage for almost two hours with Ronde making comments about Eli's "testes finally dropping" and Tiki adding that "Kerry Collins was a true leader," claiming the Giants "shouldn't have let him go." They also added that Eli's return-fire was "laughable" and that Tiki is part of the media now and it's his job to be controversial.

We can only speculate as to the impact that Barber's comments will have on the Giants in the 2007 season.

I've tried to contact Barber for updates on this controversy, but have been unsuccesful. His effectiveness as an NBC broadcaster has recently declined, since some viewers now have difficulty listening to him without laughing hysterically. If Barber continues to be a pariah in the broadcast booth he can always support himself with apperances at Fumble Recovery Clinics.

Eli Manning's answering service will only confirm that he's gone to Disneyland.

Posted by The Whited Sepulchre at 2:26 AM

Tikki Barber is a self-righteous Primadona and a Loser with a capital L! In fact, the reason why the New York Giants have not won more than one Super Bowl to date is because Tikki was nothing but a menacing distraction to the entire team; showboating for all the attention, spitting out meaningless and damaging opinions in order to get media sound bites for his own selfish endeavors. He didn’t give a damn about his teammates, the Giants Organization or anyone but his own career. We now know he didn’t know what the hell he was talking about. He is a disgrace to the entire NFL Organization and what the NFL stands for. I am no longer going to watch any television show he appears on. Tikki Barber has been exposed: A Loser who doesn’t have any integrity. A logical conclusion suggests that he doesn’t give a damn about anything or anybody but himself! I will not ever believe anything that comes out of his mouth.

I'm disappointed that they didn't hold that idiotic "Barber Shop" show after the Super Bowl. Imagine the exchange:

Ronde: "So, Tiki, how comical is Eli now?"
Tiki: "About as comical as you were when you punked you for that touchdown in that Wild Card playoff."
Ronde: "You bitch!"
Tiki: "Omelet maker!"

No matter. Someday Tiki Barber's record will be passed by someone else and forgotten; Eli and the Giants' Super Bowl upset will be remembered for all time.

For the Great Nothing, Tikki Barber...eat your heart out...Eli Manning is at it again...and again...and again...winning and winning...what is that you said? Oh, you don't remember? Comical...you were the comical one...a little shrimp walking around like you owned the Giants...well....sorry...they've done so much better WITHOUT you!