It's late Wednesday night, and I need a caption for this photo: 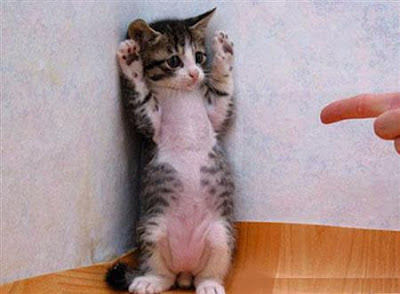 There was no winner of last week's caption challenge, since the dreaded Fembuttx had the best caption, and I'm not letting her win anything. That brings this week's prize money up to four dollars instead of the usual two.

Thanks to these folks for the picture.

Posted by The Whited Sepulchre at 4:05 AM

p.s. if Fembuttx would have won last week, where would you have given the two dollars to in her name????

Caption- I didn't kill the birds I swear!

ok ok il tel where it is

Caption: The question is, who will win? Gunslinger, or basement kitteh?

I only wanted a taste of goldie