I've written a lot of posts about the thefts required to build the new stadium. A few months ago, this comment appeared beneath one of them:

I'm not angry or offended, just curious :)
I came across your page while Googling images of the new stadium.
I'm curious as to why you seem so angry about the stadium.
I know people had to move from their homes, but this new stadium is for a lot more than just football.
We will have concerts there which will bring in money for the city and the stadium has created a TON of new jobs.
I also noticed your profile states you live in Ft. Worth, and not 5 miles away from it like I do. So the traffic probably won't even effect you.
I look at the stadium as an investment in Arlington's future, a way to keep our city "alive".Email me back ok?

amy@removed to protect her privacy.com

Here's one of the more popular images in question that Amy found on her Googling expedition. It won't hurt my feelings at all if you right-click on it and email it to everyone you know. 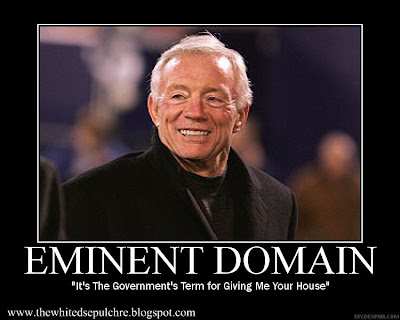 My friend Dr. Ralph, who sees attacking my worldview as his job, came to my defense:

The Whited Sepulchre takes great pride in his righteous anger and never misses a chance to spew a little.

Trust me -- he's much nicer in person, and thankfully not near so righteous.

So.... in honor of the 1.15 billion dollar stadium that you've all paid for, here is my response to Amy's comment and email. Perhaps slightly edited for clarity, and with the beer goggles removed.

1) "I'm curious as to why you seem so angry about the stadium."

I don't just seem angry over the new stadium, I am angry.

Yes, and think of the outrage that would've gone down had the city taken the homes to put up a Wal-Mart, a business that would return far more tax dollars per theft dollar to Arlington.

One of the things that has made America great, and a safe investment for people all over the world, is a concept known as property rights. If you own something here, the government can't take it away from you except in truly extraordinary circumstances. Unfortunately for us, Big Business has ridden roughshod over property rights for the last 20 years, and our reputation is declining.

3) "....but this new stadium is for a lot more than just football. We will have concerts there which will bring in money for the city...."

I heard Van Halen and Tom Petty at Reunion Arena. I heard The Dixie Chicks at American Airlines Center. The Beach Boys at the old Arlington Stadium. Now, close your eyes and think of all the economic development that sprang up around those venues after they were built. Having difficulty? It's because the development hasn't happened. The Ballpark in Arlington had the most development, but even those retail strips have struggled (I used to manage retail there. Look at the vacancies at Lincoln Square, I-30 and Collins.)

Money has been moved, thanks to the vandal, from your wallet to the repair man's wallet.

In the stadium example, assets have simply been moved from the Taxpayers' wallet to the City's wallet to then be given to contractors and Jerry Jones.

5) .... "I also noticed your profile states you live in Ft. Worth, and not 5 miles away from it like I do. So the traffic probably won't even effect you...."

I'm not concerned about the traffic. But if you get a chance, check out David Cay Johnston's book "Free Lunch", which covers this topic at great length. The Chapter titled "Pride and Profits" explains why most sports stadiums are surrounded by economic dead zones. Ask a restaurant owner around the new stadium if the traffic around their business hurt or helped on Saturday night. Regular traffic = good. Erratic killer traffic 30 times a year = bad.

6) ...."I look at the stadium as an investment in Arlington's future, a way to keep our city alive."

Lemmee tell you a story, Amy. Waaaay back when George W. Bush was just a pup, he was the front man for a group that bought The Texas Rangers baseball team. Bush brought a 2% share of the team using borrowed money. ($600,000.00) They wanted a new ballpark. Bush's buddies could've built a new ballpark themselves, but why should they? You were there for them. Bush threatened to move the Rangers out of Arlington. His cartel spent about $125,000.00 campaigning for a 1/2% increase in the Arlington sales tax. The voters approved it. Bush and Company then trampled property rights, seizing land via Eminent Domain.

All in all, the Bush gang profited from a total subsidy of $205 million dollars. (Did he send you a thank-you note? Me neither.) They had paid $86 million for the Rangers. They sold The Rangers nine years later for $250 million. The team still stunk. So what was different? Why the added value? It was all in the stadium that YOU bought for them. The $164 million dollar profit was $38 million dollars less than the money that we put into the team ! ! !

Your fellow commenter Dr. Ralph likes to refer to the Iraq war as one of history's worst "bait-and-switch" deals.

Well, the following is also from Johnston's "Free Lunch", pg 79: "What followed (after the Rangers purchase) was an early indicator of Bush's extraordinary success at marketing. Bush is arguably the greatest salesman of our time, having sold not just friends but political opponents on a war costing more than a trillion dollars and thousands of lives with the kind of pay-no-attention-to-that-pool-oil-under-the-engine polish that used car salesmen only dream about."

Guess which city should have, and could have sounded some warnings ahead of time about Bush and his buddies, but didn't?

But that's why I get angry over the City of Arlington taking away peoples' homes and giving the land to Jerry Jones.

Posted by The Whited Sepulchre at 8:10 AM

Whited Sepulchre: yes, I take great pride attacking your worldview, but sorry to say, just can't do it on this one. This is probably one of the handful of issues in which our differences are so slight as to be (statistically speaking) non-existent.

You can be as angry as you want, White Sepulchre, but you'll just have to live with it - the new Cowboys stadium is here to stay permanently. It'll probably still be standing 50 years from now.

You can keep on seething, but in the end you'll just be the one who's all huffed and worn out. It won't make any difference. So why bother?

Beijing 2008,
Thanks for the comment, but please allow me to make a couple of observations....

Both Reunion Arena and the Cowboys Stadium in Irving were state of the art facilities when they were constructed. Irving is already making plans to blow up the old Stadium, and Reunion Arena won't be far behind.

Do you really think the new Boss Hawg Bowl will be the one to hit the 50 year mark?

I don't know if any of this resonates with you, Beijing 2008, but I intend to keep seething and huffing.

I am with you Dr...I agree with the Whiteds stance on this subject...This stadium is a monument to Jerry. It has nothing at all to do with the community and tax revenues.

I pledge that I will never set foot in the building....I would never, not ever pay $45 to park.

If there is someone that I really would like to see or listen to, I will buy the DVD or CD and save myself a whole lot of money.

I bet when they open the roof, it looks like a great big bung hole....because everyone is literally takening it in the A$$.

Although the Rangers have a good record, it’s just difficult to take the Ragers seriously. Are they going to tank again once the summer heats up? Time will tell & I hope that you won’t stop supporting your team!!! Just read about them here:
http://www.rangerszone.com

Dear Whited Sepulcre: right on! I just heard about this cursed stadium day before yesterday and was curious to see if anybody out there was hip to the scam. I have come to think that professional sports fandom is a lynchpin of the American public consciousness. If we could disabuse sports fans of the egregious fictions to which they subscribe perhaps the whole structure of scammery would collapse. Joe and Joanne Sixppack love these teams and their stadiums but they are the ones who are getting fleeced in order to pay for them. Beijing, did you ever hear the expression, "Never give a sucker an even break."?...
Its not the Dallas Cowboys, its the Jerry Jones Cowboys. Its not the New York Yankees, its the George Steinbrenner Yankees. If any one on the Cowboys squad happens to be from Dallas its just a coincidence. The only feature of a sports team that accretes to its home municipality is the bill for the stadium.....Did you ever hear the exrpession, "Give them cake and circuses."?