Look to your right. See the link below the Tarrant County Libertarian Porcupine? Assorted Deceptions For A Gullible Public?
Go there, and get back to me.
Have you noticed any projects going on as a result of The Porkulus Package? Anybody out there? Anybody?

Here's the best that Joe Biden could say about the problem, and the "solution", since the economy is failing to respond to money being thrown at campaign donors:

1) "Everyone guessed wrong at the time the estimate was made about what the state of the economy was at the moment this was passed."
2) "The bottom line is that jobs are being created that would not have been there before."

But the bigger question is, at what cost is this being done?

A report due to be released today by a Republican senator contends the Obama administration's stimulus program is fraught with waste and incompetence -- evidenced by a turtle crossing in northern Florida that will cost more than $3 million and a snafu in which thousands of Social Security checks went out to people who had died.

....Will these projects make real improvements in the lives of taxpayers and communities or are they simply pet projects of politicians and lobbyists that never got off the ground because they are a low priority?" the report says.

....The White House pointed out that certain projects highlighted by Coburn have been stopped. The U.S. Army Corps of Engineers put out a statement Monday that it would drop plans to spend $1.1 million to repair a guardrail near a dry man-made lake in the Oklahoma panhandle -- project No. 7 in Coburn's report.

Here's something from ReviewJournal.com

Perhaps the police tax issue promised voters the money would be used to "put 500 more cops on the streets." A few years later, when nowhere close to 500 new officers are on patrol, a department spokesman blithely explains some of the money was used to buy new computers, "which are considered to be the manpower equivalent of one-and-a-half new officers."
More recently, remember how all those billions in "stimulus" money allocated in Washington last year were reserved for "shovel-ready" projects, creating new construction jobs and additionally re-building our infrastructure -- roads, piers, bridges, stuff like that?

Well, let the man in the plaid sport coat and the white Corfam shoes explain it all to you, Mr. and Ms. Voter. Turns out you didn't want a bunch of crummy infrastructure, after all. Instead, they found something much better to spend your money on, if you'll just step this way ...
As it turns out, most of that money is going where government always puts most of its money -- into fat paychecks for social service bureaucrats.
"Most of the roughly $300 billion coming directly to the states is being funneled through existing government programs for health care, education, unemployment benefits, food stamps and other social services," The Associated Press reported this week.

Mississippi, of course, comes in for a drubbing....

Instead, in Georgia for instance, two-thirds of the $3.9 billion in "stimulus" funds the state expects to receive over the next 16 months will go to support existing social programs. Mississippi expects to spend only about 13 percent of its $2.8 billion in federal "stimulus" money on highways and bridges. The rest will be spent, as it is in other states, to preserve existing government programs and jobs. 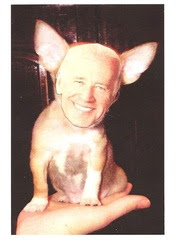 
Picture of Joe Biden, The Porkulus Watchdog, came from here.
Posted by The Whited Sepulchre at 10:46 PM