British geneticist J.B.S. Haldane was supposedly asked what it would take to discredit the theory of evolution.
"Rabbits in the Pre-Cambrian" was his response.  The idea being that rabbits should be a late arrival on the world stage, and if a rabbit fossil were found in the wrong place, it would cause some problems.

I heard or read that story quite a while back, and intended to use it for the beginning of this post, but in a different way.  While reading up on Mr. Haldane, the Cambrian layer of fossils, and rabbits, I found this tidbit:


The late J. B. S. Haldane famously said that all it would take to falsify evolution is a single Cambrian rabbit fossil, and that is exactly what has been uncovered by paleontologist Dr Wilfred Splenebyrst of the London School of Ergonomics.

“I checked and double-checked the dating, and then checked it again with three independent labs,” said Dr Splenebyrst. “There really is no doubt. This is a 520-million year old rabbit fossil.” 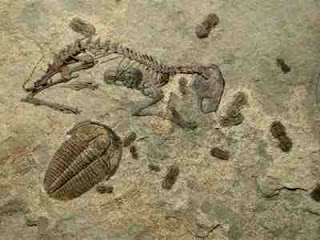 The new fossil, Paleohyrax reprobae, differs from modern rabbits in a number of subtle anatomical ways, lending weight to it being truly a new species from the Cambrian era. “This is definitely not a modern rabbit,” said Dr Splenebyrst. “It was about half the size and may even have been carnivorous. It appears to have been foraging for trilobites in the ancient tidal pools.”

I have no idea what a Cambrian era bunny means.  I kinda like the idea of a Monty Python/Holy Grail carnivrorous killer rabbit.  I like the idea that rabbits have been going at it for a long, long time.  I like the idea that if there is a God, she has a sense of humor, as shown by placing one of these critters this deep into the fossilized muck.
I know that this rabbit doesn't disturb my belief that we have evolved (and I hope we continue to).  As far as the Evolution vs. Creationism debate goes, if you acknowledge that there's a Cambrian era, you've wandered away from the Biblical idea of a 6,000 year old earth.

Ok, back to my original point.....Someone asked Haldane what it would take to disprove evolution.  He told them.
The primary theme of this website is Liberty vs. Statism.  What would it take for me to agree that a Statist mode of government is superior to a more Libertarian form?

Well, look at Venezuela.  They're running out of water.  They're a major energy exporter, but they can't keep the lights turned on.  Heck, they're even running out of coffee.  But if Hugo Chavez, the socialist nutcase running the show, were to suddenly produce a prosperous nation in spite of nationalizing everything he touches, I would have to re-evaluate my worldview.

If, in 20 years, ObamaCare™ turns out to have lowered medical costs (not prices, but costs) I would have to repent of just about every political and economic belief I've ever held.

I've had a good time over the last two years with the Global Warmists.  If it doesn't snow and freeze, that's proof of AGW (Anthropogenic Global Warming - i.e., we control the weather).  If it snows and freezes, that's also proof of Global Warming.  I think the burden of proof is on those guys.  Is there any weather pattern that would be acceptable proof that AGW is a fantasy?  I don't think so.

I'm probably misquoting Michael Shermer, but someplace in his "Why People Believe Weird Things" he makes the following statement: 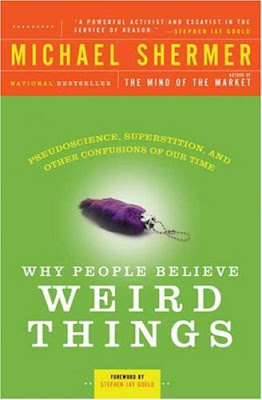 "To the True Believer, no proof is necessary.  To the Skeptic, no proof is possible."
Posted by The Whited Sepulchre at 11:01 AM

You are creating a strawman.
Scientists are not saying this.

I think the burden of proof is on those guys.

If by "those guys" you mean scientists then you have a responsibility to actually find out what THEY THEMSELVES SAY as opposed to just making stuff up that sounds comforting to you.

Go directly to the scientific community.
Do not pass go.
Do not collect $200.
Study their claims in their own words.
Quote them in full and quote them in context.

Is there any weather pattern that would be acceptable proof that AGW is a fantasy? I don't think so.

Yes.
Exactly.
The weather is not the climate. Ask NASA.

It's cold, so there can't be global warming

The Royal Meteorological Society is on the case...

Title: Sense about science
making sense of the weather
and climate.
(An introduction to forecasts and predictions of weather events and climate change.)

Scientists have noticed frequent misunderstandings about weather and climate science in public discussions. This briefing looks at the problems they have
identified. It explains what they think is wrong and how to make better sense of what they are predicting. Weather and climate are news. They will be even more in the spotlight as governments respond to the fourth report of the Intergovernmental Panel on Climate Change and try to agree on policies.

A group of climate and weather scientists have been reviewing how weather and climate issues are discussed inmedia coverage and policy debates.
We challenged them to come up with ways that non-specialists canget to grips with how the weather and climate works, and how they are modelled and predicted.
In the many discussions about the effects of global warming, air pollution and energy policy in the media, policy and economic worlds, scientists are worried that we risk losing sight of what the science is telling us. It creates better headlines to simplify messages about weather and climate science but this oftenleads to confusion.
Scientific understanding of weather and climate are constantly developing, which can make it appear that the science is more uncer tain than it really is. Extreme weather events and future
climates also make good fiction: ‘The Day After Tomorrow’, ‘The Perfect Storm’, ‘Twister’, and ‘PoseidonAdventure’ are just a few recent hits.

From their review, the scientists identified five frequent misunderstandings about how weather andclimate are understood.

These are: weather and climate predictions say what is going to happen with certainty; weather and climate are quite unpredictable; all extreme weather events are caused by man-made globalwarming; we are facing a point of no return; there is little scientific consensus or understanding about abrupt climate change.

They explain these misunderstandings in this short briefing. It is not intended to be an education in all things climate and weather related, but to alert readers to misunderstandings and provide some helpful points for everyone trying to make sense of the discussions.

Its aim is to help to avoid losing sight of the science amidst the entertainment, the rows about policy and alarmism.
In short, it is intended to promote a stronger understanding of what weather and climate predictions are based on.