I'm spending about a week and a half in Arizona, filling in for another guy at the Phoenix Jukt Micronics warehouse.  Most of our Texas transplants are staying at The Marriott TownePlace Suites since the rooms are more spacious, have kitchens, and are a little easier to live in for 6 months.  There are lots of good folks working there at the TownePlace Suites, and I owe them a lot.
Here's why:

I've worked in manufacturing for so long that I have a hard time doing anything in small quantities.  If I buy laundry soap, I get a 3-month supply.  When I cut my food, I generally slice everything on my plate and THEN start eating.  It's called "batching your tasks".  You don't have to handle your tools so many times.


So when I cook bacon, I throw an entire package in the skillet, stir it around for about 15 minutes and then put it in a ziplock bag.  I'm through cooking bacon for the week. 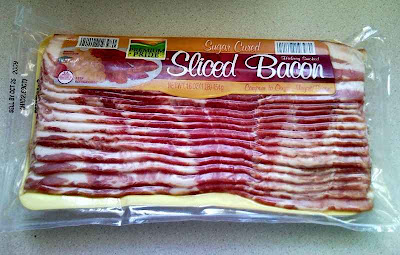 The good people at the Marriott TownePlace Suites (Phoenix) provide each resident with a couple of small skillets, but those aren't big enough for a full production run of bacon.
The other option would be to purchase microwaveable bacon, but that's against my general philosophy.  Bacon is meant to be fried.
That left me with only one choice.  The dutch oven. 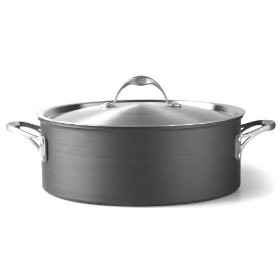 The Dutch Oven provided by the Marriott TownePlace Suites (Phoenix) is not as sturdy as the one shown above, but it would do in a pinch.  I opened up the meat package, sorted out the slices of bacon into the pot, and then concentrated on scrambling eggs.
So you can visualize the next few minutes of crisis, here's what a Marriott TownePlace Suites (Phoenix) kitchen looks like: 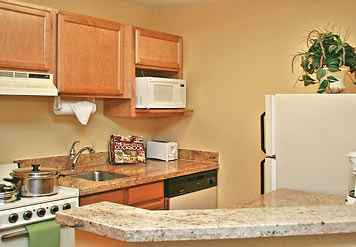 If you're cooking an entire package of bacon at once, some strips will get ready before others.  You just fish 'em out with a fork, throw them on a paper towel, and wait on the slackers to catch up.  By the time an entire package is done, there's at least an inch of boiling grease in the bottom of the skillet.  Even more if you're using a small Dutch Oven instead of the traditional wide skillet.
I was almost through with the bacon.  Maybe 2 or 3 strips weren't done yet.  All of a sudden the grease started bubbling violently and dark smoke started coming out of the Dutch Oven.  I dredged out the last few pieces of bacon just in time to see the grease go up to the halfway mark inside the pot.  A black cloud started coming out of the Dutch Oven, a cloud so big that it  looked like Israelites should be following it through the wilderness for 40 years.
All I could think of was "what if the fire sprinklers go off?"
I moved the pot to an empty burner, but the grease didn't show any signs of settling down, and I was afraid it would spontaneously ignite.
So I put the lid on it.
The grease settled down within a few seconds.  Then I tried to remove the lid so I could dispose of the grease (the room was full of smoke, BTW).
The lid wouldn't budge.  Putting the lid on top of all that heat had created a vacuum inside the Dutch Oven.  I got a fork and tried to pry it off, but got nowhere.
Next I tried putting some Mississippi physics to work on the problem, reasoning that if heat had created the vacuum, cold might eliminate it.  I put the whole cluster o' metal and grease in the sink and slowly ran cold water over the lid.
I heard creaking and groaning from the lid.  The pot then pulled the lid into itself about two inches, the metal going from convex to concave before my eyes.  With all the smoke and bubbling I almost expected a Linda Blair voice to come out of the Dutch Oven, saying "THE LID IS MINE, PRIEST ! ! !"
When the going gets tough, the tough eat their breakfast.  I sat down in my smoke-filled room.... 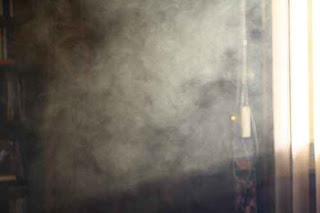 ....and ate my scrambled eggs and hard-earned bacon.
Before I left for work, I made a point of opening the windows and leaving the vent-a-hood and air conditioning turned up to "Geronimo".  I left the satanic Dutch Oven in the sink.

Ten hours later which I got back to the room, the bed was made, the countertops were wiped down and everything seemed normal, except the place still smelled like someone had turned a pyromaniac loose in the Chicago Stockyards.

I can't imagine what the housekeeping crew thought when they walked into that horrific room.  I have no idea how they pried the lid off the Dutch Oven, but there it was in the drawer with the other cookware, misshapen lid and all.  I owe them big-time.

I might invite all of them over to eat tonight.  I'm cooking lasagna.
Posted by The Whited Sepulchre at 12:34 PM

Ahh, the problem was you put the lid while hot, and it cooled down, creating the vacuum. So cold water cooled it even more and made it worse. ;)

Ok, so if we heat up that oil spill in the Gulf Of Mexico, and then get a Dutch Oven lid....

Funny story. I am surprised that you didn't get a stern talking to by the manager or anything.

I had so much fun reading your story,it was quite funny..!!-:)Is bacon your favorite food?The bacon on the photo looks so yummy..!Thanks for this post.
arizona video production