The only chart you need. Plus one other one.

The Business Insider website recently published this as "The only chart you need".
They were mistaken.
This is only the first of two charts that you need.  This one explains that we are screwed. 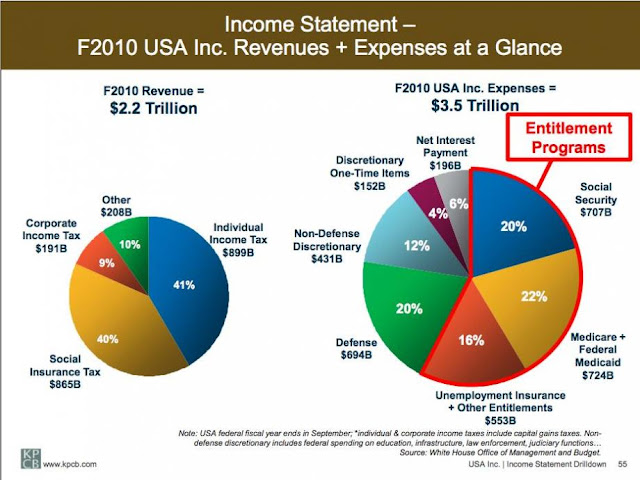 Here is the second one, from The Department Of Numbers website.  It shows tax revenue as a percentage of our Gross Domestic Product.
You can tax people at 20% of their income, and you might get lucky and take in around 20% of the GDP.

Or you can tax the rich at a 75% rate, you can punish the greedy corporations, you can end the evil Bush tax cuts, and you'll still take in around 20% of the GDP, which will be much smaller than its potential as a result.

People alter their behavior as a result of higher taxes.  How much risk would you have taken in the 1950's, back when there was a 70% confiscation rate on earnings? 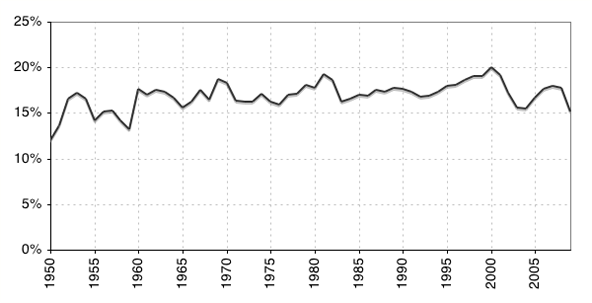 
Taxes on capital gains and dividends should be higher, for "fairness," even if this results in less investment, lower growth, more joblessness, smaller revenues for the government and more federal debt, according to Obama, as revealed during a presidential debate in his exchange with moderator Charlie Gibson regarding his proposal to increase the tax on capital gains from 15 percent to 28 percent.

"In each instance when the rate dropped, revenues from the tax increased -- the government took in more money," said Gibson. "And in the 1980s when the tax was increased to 28 percent, the revenues went down. So why raise it at all, given the fact that 100 million people in this country own stock and would be affected?"

Replied Obama, "Well, Charlie, what I've said is that I would look at raising the capital gains tax for purposes of fairness."

Yeah.  He really said that.  God help us all.

So there are your two charts.  We're spending far more than 20%.  We can only collect 20%.
That's all.
All other debate and discussion is just noise.
Posted by The Whited Sepulchre at 6:56 AM

Corporate income tax is less than a quarter of Individual income tax. That is the messed up part. Take a look at other OECD countries.

Look at the rates at which they're taxed, not the sum. Imagine if there was only one corporation, but the same number of individuals; the notion of that single corporation paying one-quarter of the amount as the sum of the individuals would be absurdly high.

Don't let your false "white knight" tendencies get in the way of your rationality.

I work for a corporation. I don't want them to pay more taxes. I want them to have more money to pay me. I want to be the one who chooses how that money is spent.

But if corporations have to pay higher taxes, where does the money come from?

Every car, every gallon of gas, every Big Mac, every french fry, every cup of coffee, and oh yes, every beer you or I purchase has the the cost of health care and taxes built into it. Even if you don’t work and don’t pay income tax, you pay taxes in everything you purchase.

No matter what the business is, it is the individual taxpayer, consumer, or employee, that pay the bill of increased cost. There is no one else to pay.

(Most of that rant was stolen from here: http://consumerboomer.com/obamacare-corporations-dont-pay-taxes-people-government-doesnt-pay-for-health-care-taxpayers/ )

Well, maybe they should try spending less. After all, it's not their money.

Henry Blodget, the author of this article, was banned for life from the securities industry in 2003 for issuing "fraudulent research under Merrill Lynch's name, as well as research in which he expressed views that were inconsistent with privately expressed negative views."

Why is this someone whose opinion we should trust?