I picked up Ron Paul's Liberty Defined a couple of days ago.

Lord have mercy, what a book. 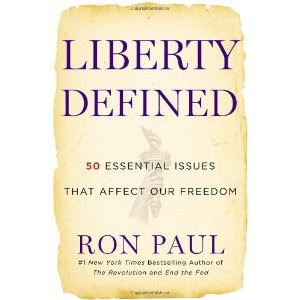 It's a distillation of Dr. Paul's philosophy of government, boiled down to 50 categories.  Abortion, Assassination, Austrian Economics, Bipartisanship, and the Business Cycle all the way to Terrorism, Torture, Trade Policies, Unions and Zionism.

This is the book of a man who is running for president, and who has been proven right on so many issues for so long that he no longer sees any need to pull any punches.  You will find sentences in here that cause you to put down the book in amazement, and think "Well, of course, that's true, but politicians just can't say things like this !!!   My God, Ron Paul no longer gives a shit !!  He's telling the truth, and to hell with the consequences !!

And then you read the offending sentence a few more times, committing it to memory.

Compared to the standard campaign book, this one is a diamond in a dung heap.  This book is going to melt the faces off Dr. Paul's fellow Republican politicians.

Here are a few samples:

Assassination:  Our government has, for years, been involved in "regime change" around the world, which includes the use of assassination.  But up until February 3, 2010, there was no admission to such a policy or recognition of its illegality.  On this date, before the House Intelligence Committee, the Director of National Intelligence (DNI) Dennis C. Blair admitted that indeed such a policy existed.  American citizens can be assassinated at the direction of the U.S. government with the authority probably coming from the DNI.  As he put it: "Being a U.S. citizen will not spare an American from getting assassinated by military or intelligence operatives."

Bipartisanship:  When the ideas of both parties are bad, there is really only one hope: that they will continue fighting and not pass any new legislation.  Gridlock can be the friend of liberty.

Business Cycle: This tendency to use macroeconomic measures began under Herbert Hoover in 1930, a pattern that was continued by FDR.  Hoover and FDR actually pushed the same agenda of high spending, attempted monetary expansion, controls on business, and efforts to keep wages high.  FDR managed to take us farther down the road to serfdom only because he had longer in office.

Campaign Finance Reform:  If there were less to buy through influencing campaigns, there would be a lot less incentive to invest so much in the process.

Central Intelligence Agency:  If the truth be known, we would all be safer if the CIA in is current form were to be abolished.

Demagogues:  ....For this reason, people who burn American flags, provided that they own them and burn them on their own property, are deserving of defense.  I'm never so embarrassed by the Republican Party than when it demagogues issues like flag burning and saying the Pledge of Allegiance.  These are despicable campaign tactics.

And it goes on and on, with Ron Paul speaking the unspeakable on the drug war, the Fed, insane military adventures, and all the other usual suspects.

This is the book of someone who had "rather be right than be president", to quote Henry Clay.  The essays on personal freedom are too extreme for any of the current Democrat politicians.  The sections on economic freedom are logical and are written with an excellent grasp of political and economic history - more than enough to terrify the Pawlentys, Romneys, Huckabees, and the rest of those who want to take their turn driving our national car in the same disastrous direction.

This is a great book.  I can't wait for the debates.
Posted by The Whited Sepulchre at 7:22 AM

I just finished the Demagogues section last night. I had't ever heard the term so it was all a bit new to me but hit so hard. The "buga boos" that both sides chase after and look to regulation and law to fix are all Liberty crushing nonsense. I haven't read it all but am really enjoying it so far.

Great Review! I picked this book up yesterday and haven't stopped reading! I just wish it was longer :( but hey, I'm sure there will be more to come in the future. RON PAUL 2012!!!