The Mainstream Media's bias against Libertarians

A few days ago, Mark Halperin created this chart for Time magazine. 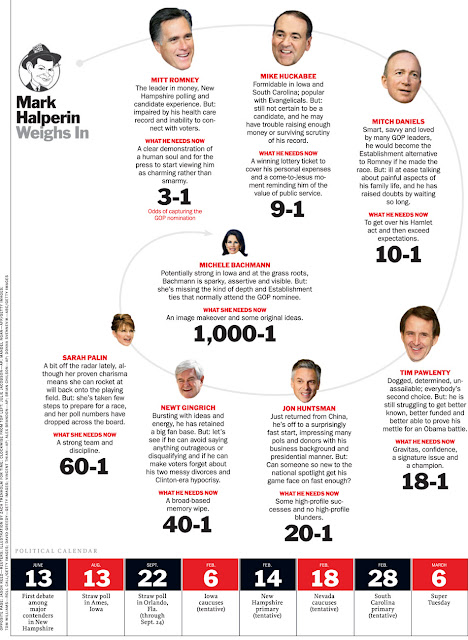 Ok, it's his chart.  He doesn't have to include anyone that he doesn't want to.
But he's got Newt on there, along with Palin and Bachmann.

At the time this was published, Newt was polling at 10%.  So was Ron Paul.  Where is Ron Paul on the chart?  Where is Gary Johnson?

I watched Meet The Depressed last Sunday.  All sorts of Republican long shots were mentioned during the panel discussion, but with little or no mention of Paul or Johnson.  I noticed the same thing on The McLaughlin Group.  I think Eleanor Clift mentioned Paul in passing, saying something like "Ron Paul is in there, but he's really a libertarian".

I could list dozens of other examples of an anti-libertarian bias in the media, but I'll go ahead and get to the point.

But here comes a group of people who think electing a new president should be no more important than choosing a new lawncare service.  If libertarians were elected in large enough numbers, government wouldn't be nearly as important.  Therefore, political media wouldn't be as important.

After the initial spending cuts of 55%, and the bulldozing of various Federal buildings, and the closing of overseas military bases, and the decimation of the bureaucrats, and the release of our Drug War POW's, and the public flogging of Paul Krugman, the Mainstream Media would have very little to write about.

Washington (CNN) -- A group of military contractors, lobbyists, and manufacturing trade associations met with Senator John Spivey (L-Texas) to secure funding for a new BR549 bomber, a defense program guaranteed to create jobs for working Americans, help our economy, and protect our border with Canada.
Senator Spivey said "No".
The group then met with Senator John Jay Myers (L-Texas) who told them "Not just no, but HELL no."
Not much happened after that.

Imagine you're a professional typist/reporter.  What had you rather type and report about?
Government leaving people the hell alone?
Or Obama's efforts to save the economy, Libya, Egypt, Social Security, education, the dollar, and everything else the government has screwed up?
Posted by The Whited Sepulchre at 7:59 AM

My money's on Mitt.

I'm getting a reputation as a Mitt cheerleader which just isn't the case. The Number One most important thing for Republicans is to win the White House with ANYONE with an R after their name.

Too many Supreme Court decisions are 5-4. Obama rejuvenated two solid leftist seats with Kagan and Sotomayor. Kennedy and Scalia are in their 70s. If either one of them is replaced by an O nominee, it will be utterly disastrous for a quarter century. Even if he replaces Ginsbur, Souder, or Breyer, it will rejuvenate their votes.

He cannot be allowed under any circumstances to make those picks. I'd let Obama be president for the next 15 years if I could choose all the justices and judges.

Republicans will keep the House and win the Senate in 2012. Republicans will gain electoral votes from reapportionment. There's no excuse for failure, and the only way Republicans lose in 2012 is nominating a loser. Right now, Romney is the only one who can beat Zero with the possible exception of Pawlenty. We can nominate Ryan or Rubio in 2020.

Nick,
If a Republican is elected, the national car will continue going in the same direction. Different people will be driving, the passengers will eat at different restaurants, and the driver will make a point of filling up at different service stations.
Other than that, there is no difference between the R and the D. Look at the spending "cut" they recently passed, which now turns out to be a spending increase.

re: "The Number One most important thing for Republicans is to win the White House with ANYONE with an R after their name."

Yes, the last bunch of Republicrats spent taxpayer money like drunken sailors in Phuket. They sold out their values, principles, and integrity.

Like I said, I'll take the total gridlock of a Republican congress and Obama as President for Life. Getting nothing done is the best thing we've got going right now. The best week in DC ever was during the snowstorm last year.

But those judicial appointments are the only thing protecting liberty right now. Only judges and justices have the power to say "Hey, idiots, the Constitution doesn't allow that!" We do NOT need judges and justices rubber stamping Obama's agenda or, worse, legislating from the bench. California judges have actually overturned fiscal austerity measures on the rare occasions Republicrats and Demonicans agreed to make cuts to public sector spending.

At least Republicans have a fiscally conservative and socially libertarian wing. How many Democrats have those credentials? What power do they have in their party?

As one of your future fantasy Senators from the great State of Texas, I'm looking forward to saying "No, Hell No and screw you and the horse you rode in on."

Also, I think you're spot on with your analysis... On top of everything else, I think there's a case of overbearing,know-it-all douchebaggery going on with journalists covering politics. They feel they are smarter than almost everyone else and relish picking the people smart enough to centrally plan our lives and protect us from ourselves.

ya can't have a one party system that looks like a two party system unless you spend all your resources on propoganda. Don't confuse the voters with real choices and real ideas. Bread and circuses, just keep treating these elections like a popularity contest, THATS THE PLAN.

I think your explanation for the bias is far too simple, and suggests of a widespread conspiracy among journalists that only serves to undermine the complexity of the problem itself, thereby perpetuating the myth to the rest of us that there exists a simple solution. Instead of working through the complexities themselves, we chase the rabbit further and further into the hole until we’ve chased so far that we can no longer see the light to find our way back to the real issue. It’s the kind of conspiracy-oriented thinking that gives the mainstream cause to chuckle when they refer to libertarianism.
I do, however, agree with you that there is generally some kind of odd bias against libertarians in mainstream discussion forums, but I think it has more to do with the fact that, at this point, libertarian solutions seem so cut and dried and extreme that mainstream folks (from the right or left) have a hard time getting their heads around the concepts. Real change isn't easy. But libertarians are asking for (expecting) a drastic change from their fellow Americans in their thinking and in the way that they (potentially) conduct their lives.

I equate this type of fear of change to a scene from Shawshank Redemption, which in and of itself is a very simplistic, emotion inducing analogy, but I think it’s no less apt for that.

Morgan Freeman's character, explaining why the elderly Brooks reacted badly to finding out that he would be paroled after spending the bulk of his life behind bars: "These walls are funny. First you hate 'em, then you get used to 'em. Enough time passes, you get so you depend on them. That's institutionalized."

To me, that about sums it up. We, as a people, have gotten so used to things being the way they are (hell most of us don't even know that there is a different way) that we're afraid to come out from beneath government's big, protective wing. We stand in its shadow, and feel cold, but fear being burned by the uninsurable, unpredictable nature of real freedom.

Thanks,
The Sound and Fury of Kristopher A. Denby