This irritates me more than it should.
I am a drummer.  Not a great one, but I get by.
I was in the drum lines at Ole Miss and Delta State.
Here's a picture of me, way off in the background, thumping the skins at Jazz Cafe. 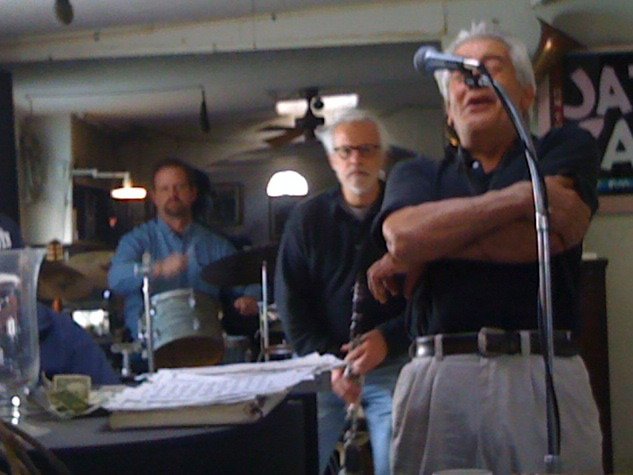 Yes, I've heard all the jokes.


What do you call a guy who hangs out with four musicians?  A drummer.

How can you tell a drummer is at your door?  The knocking speeds up.

How many drummers does it take to change a light bulb?  None.  Thank God they have a machine for that now !!!


And now we have this freakin' outrage:

All occupiers are equal — but some occupiers are more equal than others. In wind-whipped Zuccotti Park, new divisions and hierarchies are threatening to upend Occupy Wall Street and its leaderless collective. . . .

Facilitators spearheaded a General Assembly proposal to limit the drumming to two hours a day. “The drumming is a major issue which has the potential to get us kicked out,” said Lauren Digion, a leader on the sanitation working group. 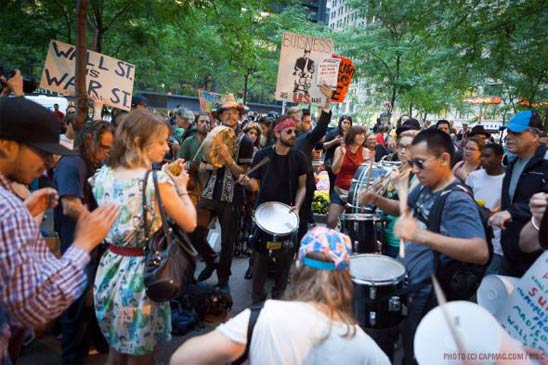 But the drums were fun. They brought in publicity and money. Many non-facilitators were infuriated by the decision and claimed that it had been forced through the General Assembly.

“They’re imposing a structure on the natural flow of music,” said Seth Harper, an 18-year-old from Georgia. “The GA decided to do it … they suppressed people’s opinions. I wanted to do introduce a different proposal, but a big black organizer chick with an Afro said I couldn’t.”

To Shane Engelerdt, a 19-year-old from Jersey City and self-described former “head drummer,” this amounted to a Jacobinic betrayal. “They are becoming the government we’re trying to protest,” he said. “They didn’t even give the drummers a say … Drumming is the heartbeat of this movement. Look around: This is dead, you need a pulse to keep something alive.”

The drummers claim that the finance working group even levied a percussion tax of sorts, taking up to half of the $150-300 a day that the drum circle was receiving in tips. “Now they have over $500,000 from all sorts of places,” said Engelerdt. “We’re like, what’s going on here? They’re like the banks we’re protesting.” 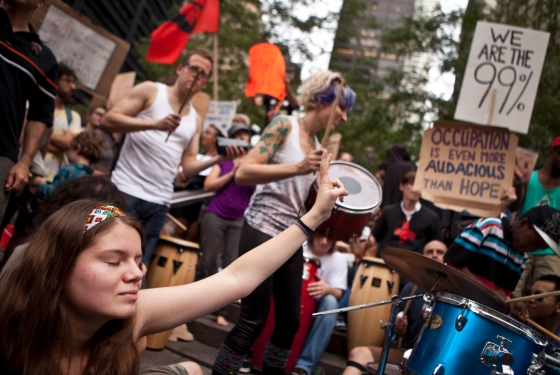 All belongings and money in the park are supposed to be held in common, but property rights reared their capitalistic head when facilitators went to clean up the park, which was looking more like a shantytown than usual after several days of wind and rain. The local community board was due to send in an inspector, so the facilitators and cleaners started moving tarps, bags, and personal belongings into a big pile in order to clean the park.

But some refused to budge. A bearded man began to gather up a tarp and an occupier emerged from beneath, screaming: “You’re going to break my f***ing tent, get that s**t off!” Near the front of the park, two men in hoodies staged a meta-sit-in, fearful that their belongings would be lost or appropriated.

First they came for The Drummers, but I did not speak out, for I was not a Drummer....
Posted by The Whited Sepulchre at 7:58 AM

What do you call a drummer that breaks up with his girlfriend?
--Homeless.

What do you call a beautiful woman on a drummer's arm?
--A tattoo.

What does the average drummer get on an IQ test?
--Drool.


What does a drummer use for contraception?
--His personality

So the patron in line asks the door man, 'How late is the band playing?' Door man answers, 'About two beats behind the drummer.'

What's the easiest way to confuse a drummer? Put sheet music in front of him.


"Occupation is more audacious than hope."

I think they're at the wrong address. They need to be in front of 1600 Pennsylvania Avenue.

How do you get a drummer off of your porch?
Pay him for the pizza.

What is the difference between a drummer and a savings bond?
One will mature and make money.

"...which was looking more like a shantytown than usual "
The correct term is "obamaville," not shantytown.

This is what socialism is all about! Isn't this what you are fighting for? 50% tax on the most able to make money (the drummers) and you also lament about the loss of property rights.

Socialism - be careful what you ask for - you might just get it!