On Judge Roy Moore's statue of The Ten Commandments

We need to talk theology for a few minutes. 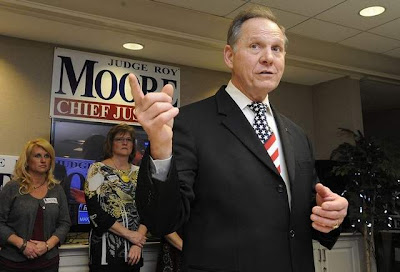 Judge Roy Moore, an Alabama Republican, is back in the news.  Here's the Montgomery Advertiser:


Roy Moore said about 2 a.m. Wednesday that even though he had not been declared the winner of the Republican primary for chief justice of the Alabama Supreme Court that he expected to win without a runoff.

“Statistically, there is just no way we’re going to have a runoff in this race,” the former chief justice said to reporters just before leaving his election night headquarters.

Moore, the former chief justice who was removed from office refusing a federal judge’s order, said about two hours earlier that, with him well ahead of his two competitors in the Republican primary, “the people have spoken.”

Moore was eventually removed from office during his previous judgeship because he wouldn't remove his Ten Commandments statue from his courtroom.  Later on he built this large statue of the Ten Commandments and had it placed in the courthouse yard. 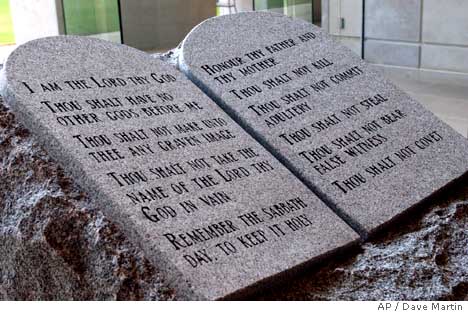 The man does love his statues. You could safely call him the Raymond Nasher of Montgomery, if not all of Etowah County.


Moore is well known for two legal fights over the 10 Commandments.

As a judge in Etowah County, he placed a small plaque with the commandments in his courtroom. The American Civil Liberties Union sued unsuccessfully to try to have the plaque removed.

As chief justice, Moore had a more than two-ton granite monument that included the 10 Commandments placed in the rotunda of the state’s judicial building. Several organizations including the ACLU sued over the monument and a federal judge ordered Moore to remove it. Believing the order was illegal, Moore refused and was removed from office.

As a devout, foot-washing, snake-handling Libertarian, I should be objecting to Moore's statue of the Ten Commandments because of separation of church and state.  Yeah, I shouldn't support my courthouses being decorated with statues of The Big Ten, scrolls from the Torah, plaques from the Kabbalah, needlepoint samplers from the Koran, or paint-by-numbers quotes from the Flying Spaghetti Monster (Bless His Noodly Appendage).

But I have to object to Moore's statue on theological grounds.

Here's why.  Here's Commandment number three in its entirety:

Moore's statue doesn't feature the entire verse.  (It's kind of wordy, and would take too long to chisel.)

With his 10 Commandments statue, Judge Roy Moore has created a graven image of a law that outlaws all graven images.  We aren't supposed to create any likenesses of any thing on heaven, earth, or in the water.

Commandment #3, which Moses supposedly brought down from the mountain, outlaws statues, paintings, pencil sketches, needlepoint samplers, that old photo of your grandparents, carvings of Christ on the cross, Michelangelo's Pieta, the ceiling of the Sistine Chapel, your senior portrait, your baby pictures, half of the internet, most stained glass windows, all art that isn't totally abstract, and the cover of Roy Moore's book.

I repeat:  This crazed Alabama Republican has made a statue of a set of laws that outlaw statues.

I don't care who you are, that's funny. 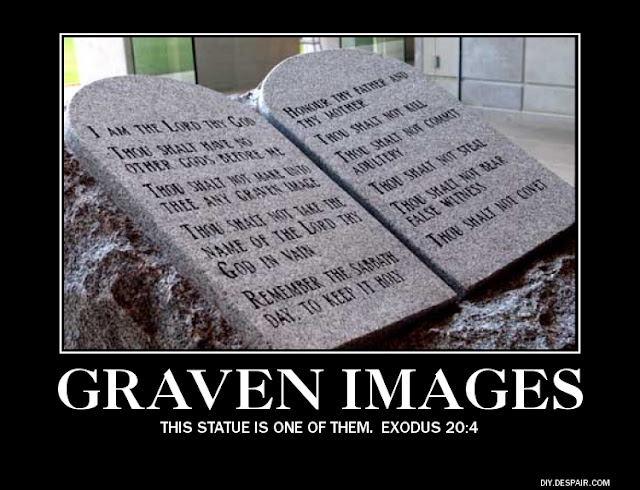 Ordinarily I would link to the sources for all of these pictures graven images, but I don't want to spread sin.
Posted by The Whited Sepulchre at 6:49 PM

Email ThisBlogThis!Share to TwitterShare to FacebookShare to Pinterest
Labels: alabama, evil, Republicans, sin, ten commandments, that which I don't know much about but know what I like, The Bible, theology, whited sepulchres

I guess a swastika would be OK?
How about a star (as long as it is red of course)?

I think the swastika would get a pas under commandment number three. They dont exist in nature. The stars are things in heaven. So all star art is sinful.

Under that interpretation, nearly any image would be forbidden including wedding photos, satellite images, Hubble Space telescope images of distant stars, or undersea photos of whales. My cousin's artwork of fish would be a graven image.

Your blog probably violates this commandment.

So are we to believe that our Divine Creator intended us to have no art or perhaps is this commandment to be more narrowly construed.

That's not a graven image. It's just a really big, stone book.

Sir,
Big Stone Books exist on earth and under heaven.
"Thou shalt not make unto thee any graven image, or any likeness of any thing that is in heaven above, or that is in the earth beneath, or that is in the water under the earth."
Assuming that the paper version of the Big Stone Book is the word of God, then we aren't supposed to have any art.
Or, we can safely assume that whoever wrote that verse was a somewhat primitive nomad who was doing the best he could at the time with what he had to work with.
We've outgrown that, right? I like art. I like stained glass windows. I like paintings, sculptures, and wood carvings.
But if i'm going to be honest with myself, I have to say that whoever wrote that verse was just wrong.

I would agree with that post in full but for your including Spaghetti Monster in the list. Any image of the latter will add grace, dignity and happiness to any public space.

HS: Do you know why we know so little about Palestine in the Biblical age, when we know so much about cultures that predate it by thousands of years?

It's because they didn't make any graven images. No postcards. No portraits. No landscapes. No historical panoramas. No hieroglyphs.

You see, the reason the commandments are "more narrowly construed" by Christians is because the theology claims they aren't bound by them.

God said it, but we don't have to do it, because we have a rationalization of how he didn't mean it; at least not for us.

Doubling the hypocrisy of the statue.

Well, they nearly all do, don't they. If I may misquote Lewis Carroll's Alice, "What is the use of a blog without pictures or conversations?"

WS,kfg,
Of course as a Brit I am aware of iconoclastic tendencies - Ollie Cromwell and his Barmy Army and all destroyed much church art. They even considered blowing-up Stonehenge* as a pagan thingy (now where have we heard of something like that much more recently...) Thank God we managed to ship most of our puritans over to your end...

Where they appear to be thriving.

Anyway, does the good Republican gentleman object to images of elephants. The book may or may not come under that commandment but surely the greatest of all the beasts of the land does?

*Abandoned because it was impractical. Those old pagan types built for the long-run!