On Libertarian Reddit, someone posed the question "What's the difference between Liberal vs. Libertarian?"

I'm not sure if this relates to what you mean, but "liberal" used mean what libertarian means today, but the socialists co-opted the word, and so in now the USA "liberal" means socialism-lite.


Anyhow, to understand the false dichotomy between "liberal" and "conservative" you need to understand it's a divide and conquer strategy. Take those who believe very strongly in personal property rights over their body, and the right to do what they want with their bodies, and play them as enemies against those who believe very strongly in private property rights that are external to the body, and who believe they have the right to use their property in any peaceful way they see fit. And then try to sideline and treat like a loon, anybody who believes in both.

There you have it. 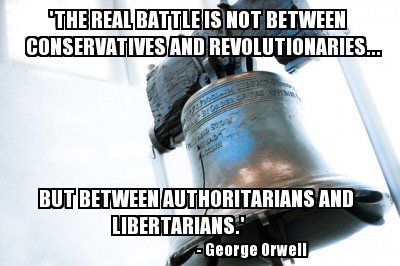 Posted by The Whited Sepulchre at 7:32 PM

How much you made speculatin' on gasoline so far?

About as much as you've made from writing sentences without verbs.

BTW, I've enjoyed going through some of your old Cafe Hayek beatdowns. Truly amazed that you kept coming back !!

Actually since IllBombYa's election liberals don't really care about personal rights as long as it is IllBombya eliminating them.