It's May 15th. If you look to your right, you'll see this is Blog For Human Rights day. I decided to go old fashioned, and talk about a series of Norman Rockwell paintings based on Franklin Roosevelt's "Four Freedoms" State of The Union Address. These were originally published in The Saturday Evening Post (1943), and were eventually used to sell War Bonds.
Yeah, yeah, I know. Norman Rockwell is totally out of favor and widely ridiculed as bourgeois kitsch. Rockwell was cursed with both talent and training, both of which are out of favor. If only he'd been inspired to create a Virgin Mary with elephant dung, or photograph a crucifix in urine. Now THAT is art. 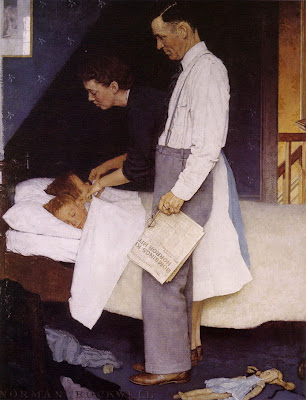 But I digress....the painting above is called "Freedom From Fear". You can't see the newspaper headline that the father figure holds, but if I remember correctly it's about the Nazis fire-bombing Europe. I'm sure someone will correct me if I'm mistaken.
Here's another image, a photo taken in the aftermath of recent explosions in Jaipur. 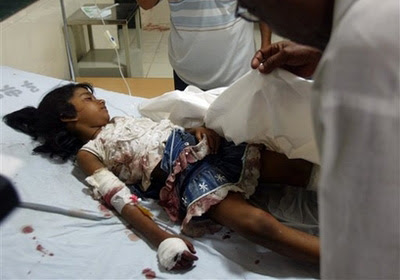 The seven bombs that injured this child were packed with lethal ball bearings and strapped to bicycles, and went off close to at least five Hindu temples within 20 minutes of each other.
In recent months, terror group Lashkar-e-Toiba has advocated jihad aimed at "liberating Muslim-dominated areas of India".
In this it has been echoing calls attributed to Osama bin Laden, who has made it clear he sees Hinduism as being an enemy equivalent to Zionism.
Here's the second Rockwell painting, called Freedom From Want. You can safely assume that it's Thanksgiving. 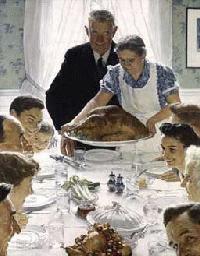 In the meantime our government, in an effort to guarantee that campaign donors are properly cared for, has mandated that MORE than 100 % of our yearly production of certain foodstuffs be converted to ethanol. The current Farm Bill, which will probably make it through the House of Representatives today, provides more of the same.
This has caused food prices all over the world to skyrocket. Food riots have broken out in Haiti, Bangladesh and Egypt. 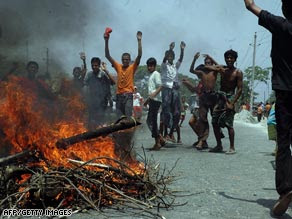 Here's the third Rockwell painting in the series, and it's called Freedom of Speech. My parents had a picture book of Norman Rockwell paintings, which included this series, and I've always been intrigued by the man standing to speak. Do you see what's unusual about him, relative to everyone else? 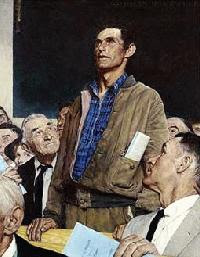 He's the youngest person in the painting.
He's also wearing the grungiest clothes in the painting.
And yet everyone is listening to him.
In the meantime, our allies in Saudi Arabia are putting barbers on trial for "insulting Islam".
In Canada, believe it or not, Canada.... The Alberta Human Rights Commission, truly one of the most poorly named bureaucracies in North America, is hauling people into court for insulting Islam.
I'm noticing a trend.
And don't get me started on the sanctions against Free Speech in China. 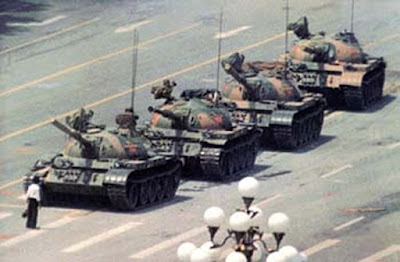 The last of the Four Freedoms paintings is Freedom To Worship. (In President Roosevelt's speech, it was Freedom Of Religion.) 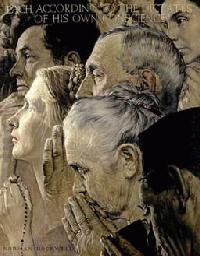 Lest anyone coming to these pages for the first time think that I obsess over the Islamic concept of death to all apostates, well, I do. Just to share the joy and play fair, look at this quiz comparing remarks from Jerry Falwell, Pat Robertson, and Co. to those occasionally made by Bin Laden.
There are degrees of intolerance, however. This man was apprehended in Iran with a Bible in his car. 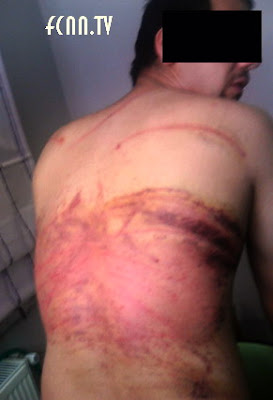 That's all I've got for "Blog For Human Rights" day.
I've done my best to contrast some Norman Rockwellian sentimentality with some rest of the world harsh reality.
Click on the little widget to your right, or here, and there are links where you can contribute to various worthwhile causes.
In the meantime, raise hell.
Don't put up with it. Don't vote for those who do. Bang pots and pans together in the middle of the street.
Ask yourself, What Would Norman Rockwell Do?
Posted by The Whited Sepulchre at 12:59 AM

Certainly a challenging, confronting posting. And that's how it should be. Ignorance is simply not a good enough excuse for passivism. If we don't know, get to know.

We live in a society where ignorance is beyond the individual's control and for which, therefore, he is not responsible before God.
Sad to say that 90% of the population prefer to be ignorant so that they do not have to answer before God for what they choose to not understand.
Scenes such as these that you have shown, go on everday. PLEASE do not insult me by saying people do not know or understand what is going on. Being scared of standing up for what you believe or not believe will cause you more pain and suffering in the years to come.
Even in the Amish community, they NOW know that there is evil out there in the world and that by not accepting the ways of the new world into your home, doesn't always keep you out.

What an original, thoughtful post! Thanks for your thoughts on human rights. As the Preamble to the Universal Declaration of Human Rights reminds us, “…recognition of the inherent dignity and of the equal and inalienable rights of all members of the human family is the foundation of freedom, justice and peace in the world.”

Actually, I liked this post so much I submitted it to the Watcher's Council for this week's best post contest. Congrats. You won.
http://www.watcherofweasels.com/archives/002378.html

This is an article that I find from the first. You write an article giving a lot of information very useful for me. Thank you.