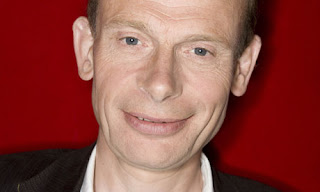 Mr. Marr is the former political director of The BBC, which would sink like a stone if the British government allowed a true competitive market in broadcasting.

"A lot of bloggers seem to be socially inadequate, pimpled, single, slightly seedy, bald, cauliflower-nosed young men sitting in their mother's basements and ranting. They are very angry people," he told the Cheltenham Literary Festival. "   "....the so-called citizen journalism is the spewings and rantings of very drunk people late at night."

I'm fairly old and married.  The late night drunken rants are produced at my own dining room table.

Here's a little more on the BBC, where Andrew Marr is still employed.  This is courtesy of Wikipedia  (Yeah, Wikipedia.  I'm in a hurry.  Gotta get a lot of work done early so I can get drunk tonight and start typing....)


. The BBC is an autonomous public service broadcaster that operates under a Royal Charter.  Within the United Kingdom its work is funded principally by an annual television license fee which is charged to all United Kingdom households, companies and organisations using any type of equipment to record and/or receive live television broadcasts;  the level of the fee is set annually by the British Government and agreed by Parliament.

Good Lord, can you imagine the self-righteous crap we would have to endure if National Public Radio and Public TV were 100% supported by the Feds with some help from involuntary "donations" from every U.S. household?  And no real competitors were allowed ?
Hell, the hardware stores would instantly sell out of torches and pitchforks.

I keep wondering how much longer the Brits are going to put up with this.
Be afraid, Andrew Marr.  Be very afraid.  We're angry, pimpled, inadequate, and drunk.  And we're proving that ANYBODY can sit down and start typing.

The picture of Andrew Marr's pasty Brit complection (that doesn't show his baldness level) came from here.
Posted by The Whited Sepulchre at 7:48 AM

Marr's comments reflect a fear not only of new technologies, but also of the erosion of privileges they encourage: http://bit.ly/bkYMd2

No, you're not some pimply-faced drunken ranter, but I do fear you're turning into some geriatric sourpuss yelling at neighborhood kids to stay off his lawn. You know, the type who re-forwards alarmist emails to every one on his contact list until someone finally replies with a link to a Snopes page that debunks whatever the email was about.

Beware creeping geezerism - all those emails usually get shunted off to the trash folder unread.

...that was harsh. Not to mention geezerish as well.

Forgive me: I'd been sitting in an airport, waiting for a flight, and not in a particularly sunny mood.

But I do wish you could see how many people Twitter and Twixt this stuff ! There a lot of us sourpuss geezers out there.

And you know the analogy of how Free Speech doesn't cover the right of someone to yell "Fire" in a crowded theatre?
When the theatre really is on fire, it's not a prank, it's a responsibility.

Also, Brett Gerry's link about Luddites (above) is pretty good.

The photograph you used doesn't do Mr Marr full honors. Check out this one:

And I left in comments there a reference to the lad's reluctance to wash self - for all the good reasons, of course ;-)