Yes, The Fighting Okra Do Exist, And They Dwell Among You

My co-workers get a kick out of my Fighting Okra shirt every time I wear it.

I graduated from Delta State University in 1983.  At the time, our mascot was the DSU Statesman, quite possibly the most boring mascot in the nation.  Everyone else had Panthers, Rebels, Bulldogs, Vandals, Vikings, Tigers, Bears and Hawks.
We had this thing that looked like a Leprechaun on steroids.  No connection to the Mississippi Delta region, no personality, and no defining character traits. 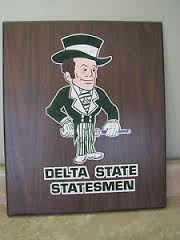 The way I've heard it, several years after I graduated some guys in the athletic dorm got a bit tipsy and drew up the first ever picture of the Delta State University Fighting Okra.  Granted, the Mississippi Delta isn't particularly known for Okra, but at least the Delta is very green, we grew a lot of other plants there, and it was distinctive.  NOBODY else would have stadiums full of college kids chanting OKRA! OKRA! OKRA! after touchdowns.
The idea took off from there. 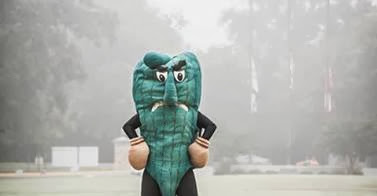 Here's the back of my DSU Fighting Okra T-Shirt, sent to me by former neighbor Alan LaMastus. 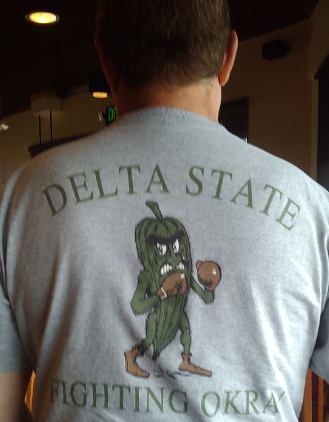 The Okra still isn't the official mascot of Delta State University.  The Stateman and The Okra have agreed to co-exist until enough elderly alumni pass away.  Then the Statesman costume can then be sent back to whichever Irish Pride Festival or St. Patrick's Day Parade it came from. 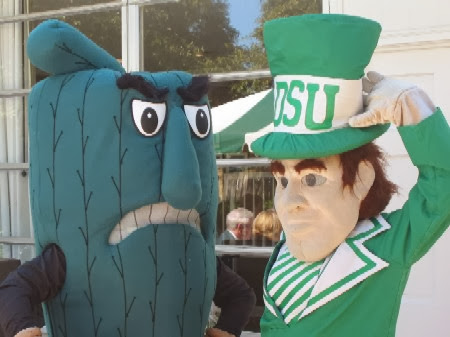 Some radio station once published a listing of the Top 5 Bad College Mascots.  They declared the "Okra" the absolute worst.

Here's a slice of what they had to say:


The pride of Cleveland, Mississippi - Delta State University and the feared "Fighting Okra". As you well know, there's nothing that can scare the bejeebers out of you like a ticked off vegetable. Remember those terrible nightmares you had as a child of that horrible "Fighting Okra" coming to drag you off into the garden? Course you don't. Nobody does. Fighting Okra? Sounds more like the college took a dare from several rednecks in Mississippi to brand themselves that way....

Posted by The Whited Sepulchre at 11:15 AM

No Okra; no Gumbo. Filé might thicken it but it makes it taste like shit. So; Okra it is for me!

Yeah, I went to school at a place whose logo is a gumbo ingredient.

IIRC weren't the carniverous ambulatory plants in "The Day of the Triffids" some kind of genetically modified okra? That's what they looked like.

They were pretty scary.

then, of course there is the best mascot of all:
http://www.goslugs.com/landing/index

Born and raised in South Louisiana, I can state as a fact that there are plenty of types of gumbo without okra. And those are the best types of gumbo. Now, if by thicken, you mean "turn into a gelatinous mess," you are correct, okra does do that. And if that's how you like your gumbo, good on you. (And I don't use file, either.)

I, for one, am terrified of okra. It's a big, itchy plant when alive. And one of the grossest vegetables ever.

Indeed, of all the things I've had in gumbo -- sausage, ducks (Oregon), chicken (South Carolina), squirrel, shrimp, oysters, crabs -- gumbo is the scariest. I say it's a great mascot.

Hey, you know what happens when vegetables go bad...

Fighting Okra is the least of it when you clean your fridge! ;)

Makes me feel better about being a "Gopher"!

I bet that Statesman is supposed to look like Jefferson Davis.

Come on youall--slice it and fry it. It's great.